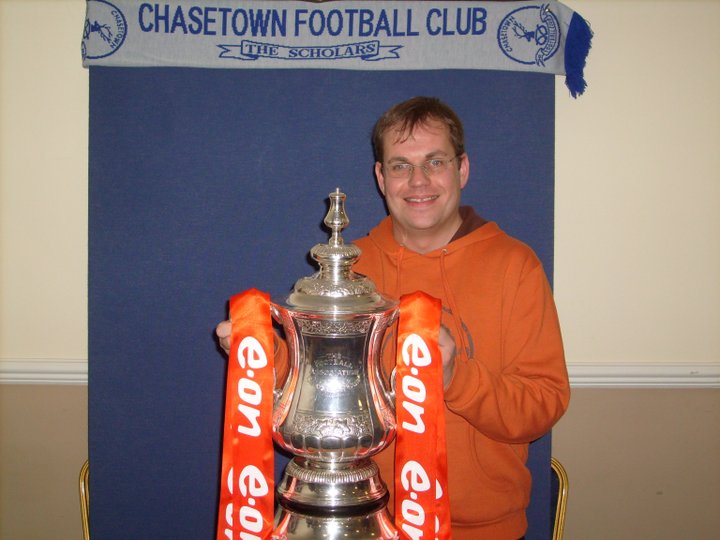 Chasetown fan Paul Mullins has hit the remarkable milestone of going 10 years without missing a game, home or away.

The 46-year-old completed the feat at the recent game against Ramsbottom United, a total of 568 fixtures, including every competitive game home or away that Chasetown have played.

He estimated that he’s been to at least 1300 Chasetown games, since his first which was back in March 1985.

Paul also acts as the club’s press officer, running the website, Twitter and keeping the official stats/records for the club.

For his best game watching Chasetown, he went for the FA Cup replay against Blyth Spartans in October 2005, which secured the then ninth-tier club a famous place in the FA Cup first round proper, where they drew with Football League Oldham before losing the replay 4-0 away.

“That was probably my favourite away ground to visit, as it was such a historic match for us,” Paul said.

“I was 13 when I went to my first game, my teacher Mr Scorey (Bryne) was manager and I lived about three-quarters of a mile from the ground.

“I don’t remember who it was against. I lost the notebook I used to write them down in, hence I only know my total games is 1300+!”

He has no plans to end his current 10 year run any time soon, but recollected a few near misses over the years.

“In 2002/03, I knew I would miss a game because of my dad’s wedding, so I also missed another game for a wedding, knowing once the 100% record had gone I might as well miss another.

“Then in the current run, the closest to missing a game would be a pre-Christmas game with Mickleover.

“My sister was getting married at 1pm at the church down the road from the ground.

“I did wonder if I could nip out for the match.

“Luckily, my sister had wanted a white wedding and it snowed the day before, which meant I got a phonecall from the match secretary the day before saying ‘no way the game will go ahead, so enjoy the wedding, even though we can’t call it off until the morning.’”

From Walsall, Paul works for Network Rail and writes children’s books about football in his spare time.

He mentions both Blyth Spartans games in his best moments, especially as he did the commentary for BBC Radio West Midlands, as well as games against Port Vale and Cardiff.

Amongst his favourite players are ones that he’s become friends with, as well as a supporter of - left-back Andy Hitchcroft, centre-back Kevin Thompson, striker Nick Wellecomme and former player and manager Charlie Blakemore.

How long does he think he can keep the run going for?

“Until they carry me out in a box!”

Lights on for Glossop  Glossop North End unveiled their newly installed floodlights at Surrey Street ahead of a recent cup game against FC United.