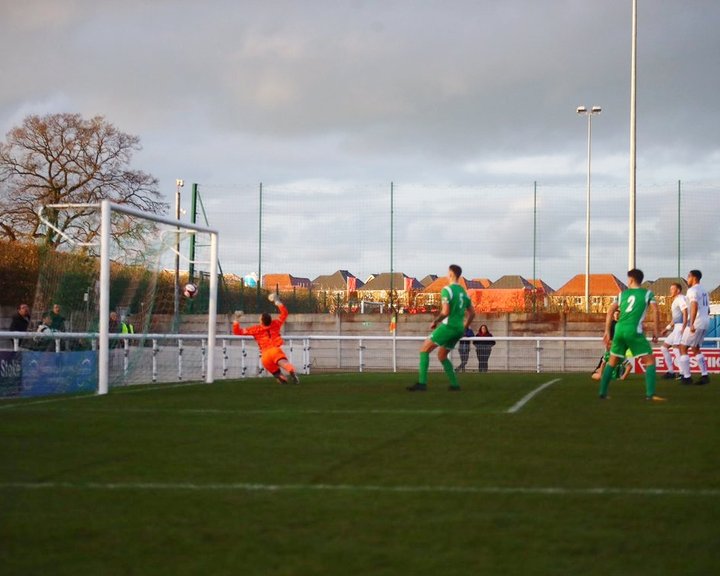 It will be a happy Christmas for the top four in the EVO-STIK League Premier Division after all won on Saturday.

Leaders Nantwich Town maintained their six points lead at the top with a 3-2 win over Basford United, who were the main losers of the day, dropping to 8th.

Basford led inside two minutes through Matthew Thornhill, but a Joe Malkin brace either side of Jamie Morgan’s strike was enough for the Dabbers in front of 488 fans at Weaver Stadium, despite youngster Zak Goodson’s late strike.

Scarborough left it late to see off struggling Workington, Bailey Gooda and Michael Coulson both scoring in the last three minutes as the Seadogs won 3-2.

Conor Tinnion gave the hosts the lead before Coulson’s penalty levelled the score. That was how it stayed until 87 minutes, when Gooda struck.

Farsley Celtic continue to turn the screw as they made it six wins in a row with a 2-1 win over Marine.

Ben Atkinson’s penalty and David Syers had them 2-0 up at the break, and they held on for the points despite Niall Cummins’ second half goal.

There was late drama at Cantilever Park as Warrington Town completed a stunning late turnaround to beat Buxton 2-1.

The Yellows had largely been second best and trailed to Alex Brown’s 14th minute header.

But Dominic Reid won a penalty five minutes from time, which was converted by Jack Dunn, before Reid struck in the fourth minute of injury time to earn the hosts a fourth straight win.

There are now four points between the top four and the rest, with South Shields up in to fifth place following their late draw at Lancaster City.

Ben Hudson looked to have won the Dolly Blues the three points when he scored in the 87th minute, but David Foley earned the visitors a valuable point to lift them above Gainsborough Trinity.

Those results mean Matlock Town are now just a point off the play-offs, as they beat Stafford Rangers 3-2.

They were made to work though, having trailed 2-1 at the break through goals from Joe Cuff and Jake Charles.

But Craig Westcarr added to his first half strike on 69 minutes and Adam Yates earned the win 16 minutes from time.

Stalybridge Celtic ended a run of four without a win as they won 1-0 away at Grantham Town, Andrew Scott’s early goal proving enough; and one goal was also enough for Witton Albion, who won 1-0 away at Hednesford Town thanks to James Foley’s penalty.

North Ferriby United remain rooted to the foot of the table after they were beaten 3-0 at Hyde United.

Goals from Connor Simpson and Tom Pratt had the three points in the bag before Chib Chilaka added icing on the cake in injury.

Elsewhere, Mickleover Sports came from 2-0 down to draw 2-2 at home to Bamber Bridge, the sixth time Brig have drawn away from home this season.

Danny Forbes and Alistair Waddecar had the visitors two up at the break, but Pablo Mills and Nathan Jarman earned Sports only their second point out of 18.

West Round-up: Magnificent seven for Radcliffe  The pressure of Radcliffe’s relentless run has finally told as they leapfrogged Runcorn Linnets to the top of the EVO-STIK League West Division table.