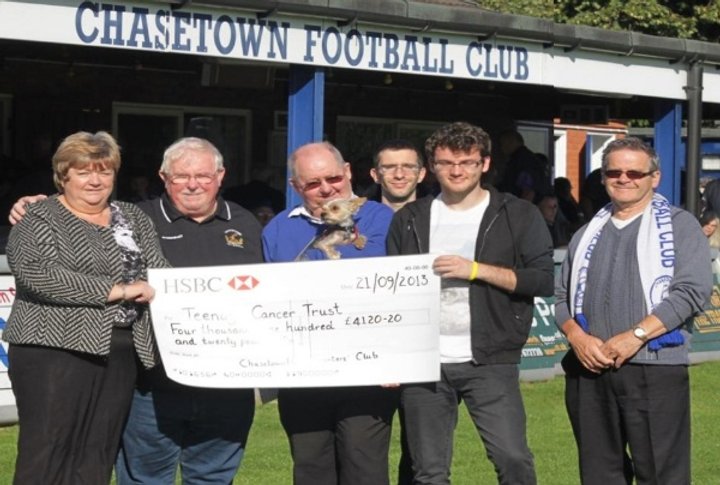 Sutton is battling incurable cancer and has been fund-raising for nearly two years for the charity. As he neared his target earlier this year, he enlisted the First Division South club's help and in May the Scholars staged a Football Fun Day and charity match involving the club's FA Cup legends with their First Round heroes from Oldham Athletic in 2005 taking on the 2008 team who faced Cardiff City in the Third Round.

As well as the clash featuring their Bluebirds versus Latics legends, the West Bromwich All Stars also played in a second game against Brownhills & Shire Oak, the two teams the 18-year-old played for before illness curtailed his sporting activity. Hundreds of fans attended the event which saw Chasetown lay on a whole series of family activities throughout the day to help raise as much as possible.

Sutton, who's now setting his sights on raising £150K, is pictured second right receiving his a cheque for £4120.20 which took him over the threshold from Chasetown's Janice Brookes, John Franklin, Trevor Youngman, Chris Wadham and Nigel Southall before Saturday's match against Belper Town.

Chasetown's CEO Mike Joiner said the club was proud to help after learning about the teenager's charity mission.

Joiner said: "We knew number eight on Stephen’s bucket list of things to do was to raise funds for The Teenage Cancer Trust by organising a charity football match. So we readily made the Scholars Ground available to him, knowing that our admin staff and Supporters Club Committee would be there to provide Stephen with whatever help he would need to organise the day and maximise the revenue from it.

"We do regard ourselves as an integral part of the local community and were only too pleased to have been able to help raise such a wonderful sum for Stephen’s charity, a sum everyone involved with the event should be proud to have reached, particularly as the cash raised at Chasetown took Stephen through his £100,000 target."

For more information visit of the teenager's story and activities visit: www.facebook.com/stephensstory. To make a donation go to: www.justgiving.com/stephen-sutton-tct.