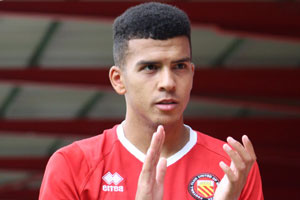 Aaron Morris is enjoying life at in-form FC United of Manchester, who are on a fine form of 15 unbeaten in all competitions.

Neil Reynolds’ side sit third in the BetVictor Northern Premier Division with eight wins in a row in all competitions, including their recent 5-1 triumph over Hyde United.

Tunde Owolabi made it a stunning 27 goals in 24 games for the Reds this season with a brace, while Regan Linney also bagged two and Curtis Jones scoring the fifth against the Tigers.

Speaking to FC United’s social media, Morris said: “It’s unbelievable to be in and around the club at the minute. The team is on a great run of form and gone into the new year absolutely flying, so everyone is loving it and it’s great to be a part of.”

Morris, 23, joined the side from Runcorn Linnets as a central defender, but has enjoyed life as a right-back in the current season.

“It’s been good. It’s a new position to me, so I’m still learning every week,” he said.

“That’s just the way football works.I’ve found a spot at right-back and feel like I am now making it my own and I’m progressing as well as the team and it’s good to be a part of.

“As a kid, I did play up the pitch a lot more at striker or midfield. I feel like I do have that part of my game to me and obviously as the years have gone on, I’ve dropped further back the pitch. But you still keep those same skills and now I feel like I’m being able to use them again as a right back which is good.”

 Roney hits 500 mark for Sheffield Sheffield record-holder Matt Roney says it is a privilege to play for the world’s first football club after making his 500th appearance.