Anniversary a happy one for Smith and Chambers 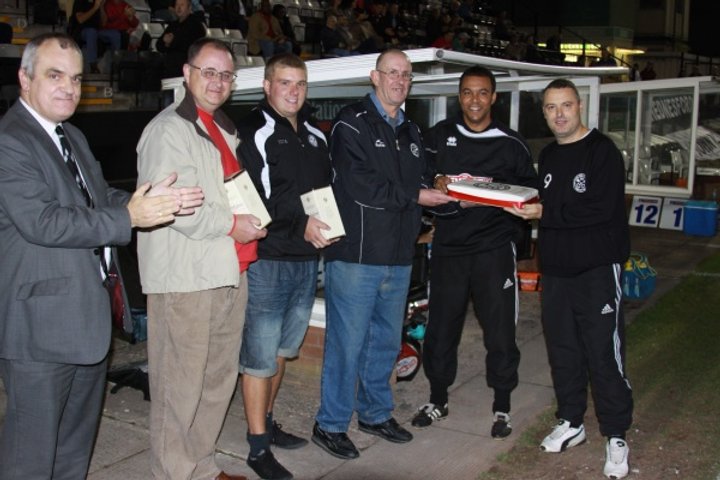 Hednesford Town management duo Rob Smith and Larry Chambers have marked the culmination of a successful twelve months in charge of The Pitmen as their young side sit well-placed in the Evo-Stik Northern Premier Division and, following Saturday’s 1-0 win away at Carlton Town in the FA Cup Second Qualifying Round, now have a big cup game to prepare for as they sit in wait for the winner of the Histon versus Corby Town replay on Wednesday night.

The former Telford management pair were recruited by the Club following the departure of Bernie McNally in September 2010 and the Keys Park outfit have hardly looked back since, going eleven months unbeaten at home, narrowly missing out on promotion after a heart-breaking penalty shoot-out loss to Salisbury City, and now progressing to the Third Qualifying Round of the FA Cup for the first time since 2005.

Club Secretary, Terry McMahon, lavished praise on the duo following a presentation of Whisky and first anniversary cake at the recent home game versus Burscough and believes it is the hard work the two do behind the scenes which leads to positive performances and results

‘I know from experience that Rob and Larry are incredibly hard workers and I think that ethic has rubbed off onto all the members of the first-team squad. We are blessed as a Club to have such a highly regarded management team at Keys Park and the solid run of results we have got are our reward for that.’

The Pitmen will face either Histon or Corby at Keys Park on Saturday 15th October, Kick Off 3pm but have league matters to worry about prior to that as they welcome Frickley Athletic on Saturday 8th October and then travel to Liverpool to face fellow play-off contenders Marine next Tuesday.

McMahon, who has fond memories of Cup Run’s in years gone by, knows how much all the supporters and people connected with the Club will look forward to the FA Cup match but is safe in the knowledge that Smith and Chambers will keep their squad focussed on the league games ahead.

‘Every Hednesford supporter remembers our FA Cup heyday and its superb that the Club are making progress in the competition again but I have no doubt that the players will remain concentrated on the league campaign for the next two games before thinking about any possible FA Cup glory.’