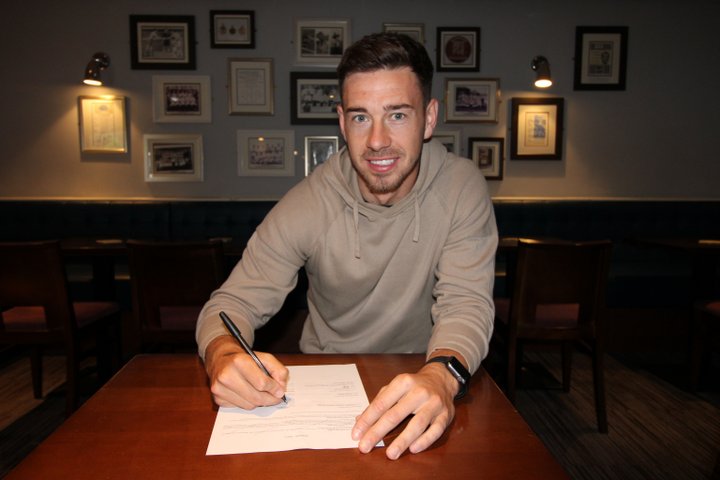 Robert Briggs has become the latest player to commit his future to South Shields after signing a new contract.

The midfielder, who picked up a host of accolades after a stellar 2018-19 campaign, will extend his second spell at Mariners Park into a fifth campaign.

Across his two stints with the club, Briggs has made 221 appearances and scored 62 goals.

It was his first campaign as the club's vice-captain, and after narrowly missing out on promotion through the play-offs last time out, Briggs is determined to go one better in 2019-20.

The 27-year-old said: "I'm over the moon to commit my future to the club.

"It's never nice when you're out of contract and you have to try to sort lots of things out, but I'm delighted to get it done.

"There were a lot of motivations to stay.

"We ended last season in a disappointing way and I think we've got to put that right, so I couldn't walk away.

"I've also built a really good bond with everyone at the club over the last four years, including the fans, so it would have been really difficult to leave.

Briggs began his second spell with Shields in August 2015 after joining the then Northern League Division Two club from Spennymoor Town.

He was part of the team which won the Division Two title before following that up a year later with the Division One championship, along with the FA Vase, Durham Challenge Cup and Northern League Cup.

More silverware followed in 2017-18 as Briggs helped Shields to the Evo-Stik North Division title, and he is hoping for more successful times ahead.

He added: "Because I've been here from the start of this journey, I feel that I should continue for as long as I possibly can.

"Luckily I've got the chance to do that.

"Winning the league is the target for us next season.

"We were very close last season so I think the only way to put that right is by going and winning it next season.

"If we fail to do that then promotion is the next target, but for me it's all about winning the league."

South Shields joint manager Lee Picton said: "Robert has been right at the heart of the on-field success that the club has enjoyed over the last four years, and to have him commit further to us is a huge boost ahead of next season.

"His talents were duly recognised wen he was named in the Evo-Stik League's Team of the Season, an accolade that was richly deserved in my opinion.

"He knows the club inside out and he knows exactly how myself and Graham work, and the standards we demand.

"To have his experience, quality and leadership in our dressing room moving forwards will be invaluable."