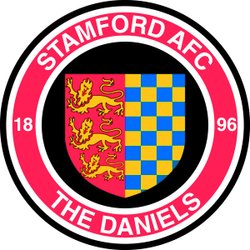 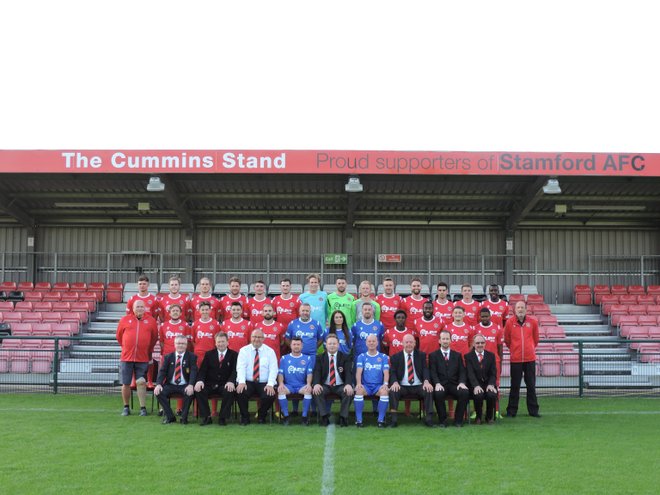 Stamford have announced that manager Graham Drury has committed to the club for next season.

Stamford have boosted their attacking options with the signing of Robbie Parsons on a month's loan from Melton Town.

Stamford received their Club of the Month award for October/November at the weekend.

Stamford have re-signed full-back Jordon Cooke after his release by Matlock.

Stamford broke their crowd record at the Zeeco Stadium for the visit of Football League side Peterborough United.

There is evidence to support the existence of a football club in Stamford as far back as 1870 and various clubs came and went in the next twenty years until 1894 when the town’s two most prominent clubs Stamford Town and Rutland Ironworks agreed to amalgamate. Initially the club adopted the name of the Rutland Ironworks who were viewed as the stronger of the two, but the current club’s existence is generally accepted to date back to 1896 when the Stamford Town name was adopted to give the club a higher profile. It was to be some years before the club became known as “The Daniels” after Daniel Lambert, the heaviest British man ever, who died in 1809 in Stamford weighing 52 stone or thereabouts and is buried in St Martin’s churchyard in the town.

The club’s first ever match was played on Hanson’s Field, at the location of Wothorpe Road. Evidence has come to light that the site staged football in the early 1870s making it a candidate for the world’s oldest football ground. Stamford Town enjoyed success from the off and won the Younger Cup in their first season. Several other trophies followed in the next decade and a half as Stamford established themselves as one of the area’s most successful clubs. Most notable were back to back successes in the prestigious Hinchingbrooke Cup in 1907 and 1908, the trophy being won in front of four figure crowds in the finals at Huntingdon.

Encouraged by these successes Stamford turned professional in 1909. Stamford was quick to progress and in only their third season of Northants League football they won the championship. In 1913/14 Stamford enjoyed their best ever FA Cup run reaching the Fifth Qualifying Round before losing 2-0 at Chatham.

Financial troubles plagued the club towards the end of the thirties and in 1939 they decided to take a season’s break to put the finances right. Within a few weeks war was declared, and it was 1945 before league football resumed.
After a season regrouping in the Peterborough League Stamford returned to the United Counties League, successor to the Northants League, in 1946. They soon earned a reputation as cup specialists winning the Lincolnshire Junior Cup in 1949, UCL Knockout Cup in 1952 and Lincolnshire Senior Cup ‘B’ in 1952 and 1954. Football in the early post war years captured the public’s imagination with a record crowd of 4,200 watching a 3-3 FA Cup draw with Kettering in 1953. In 1955 Stamford joined the Central Alliance before stepping up in class to join the Midland League in 1961. The sixties were years of struggle although 1961 saw Arsenal come to Wothorpe Road to beat the Daniels 9-0 in a match arranged to mark the town's quincentenary.

1972 saw the Daniels return to the United Counties League where they became a power under the guidance of former Peterborough manager Norman Rigby. Another FA Cup run to the Fourth Qualifying Round in 1973/74 was followed by an excellent FA Vase campaign a year later, Stamford reaching the Semi-Finals of the new tournament. After several near misses Stamford won the UCL league & cup double in 1976, also going one better in the Vase, losing 1-0 to Billericay in extra-time at Wembley. Malcolm Hird – later voted Stamford’s Player of the Century by supporters and goal ace Dick Smith, the club’s highest postwar marksman, were stars of this side. Stamford continued to dominate the UCL under Rigby winning a further title in 1978, their first Lincs Senior Cup ‘A’ success the following season was the highlight of a disappointing campaign under Ray Medwell, but the appointment of ex-skipper Hird as boss in the summer of 1979 proved a masterstroke.

Three seasons under the management of the Casterton schoolmaster saw the Daniels complete a hat-trick of UCL championships, Knockout Cup successes in 1980 and 1982 and best of all a Wembley return in 1980, goals from Keith Alexander and Andy McGowan giving Stamford a 2-0 win over Guisborough.

Under Chris Corby’s management Stamford enjoyed Lincs Senior Cup ‘A’ success in 1982/83 and a third Wembley visit in 1984, losing 3-2 to Stansted in the FA Vase final, while Paul Brackwell steered the Daniels to Knockout Cup success in 1986. By now the club’s golden age was at an end although the club continued to produce good players with Keith Alexander and Andy Tillson (both Grimsby), Darren Edey (Peterborough) and Brett McNamara (Northampton) all graduating to the pro ranks.

The appointment of Steve Evans as manager in 1994 started Stamford’s revival. His policy of signing high profile players brought ex-Posh favourites Trevor Quow, Steve Collins, Milton Graham and Micky Gynn to the club, along with Scottish international David Speedie and ex-Olympic decathlon champion Daley Thompson. The club’s centenary season saw Stamford win the UCL for a seventh time after a spectacular late burst through the pack, while 1997/98 was even better as Stamford retained the title, also carrying off the Lincs Senior Cup ’A’ and Hinchingbrooke Cup.

Promotion to the Southern League was the outcome and the club’s debut campaign in the Midland Division proved hugely eventful. After steering Stamford to Benevolent Cup success and a place in the Lincolnshire Senior Cup Final manager Evans moved to Boston United with Billy Jeffrey arriving from Rushden & Diamonds to take the reins. The new manager rebuilt with younger players and a final placing of 18th in the Midland Division. League reshuffling saw Stamford placed in the Eastern Division for 1999/2000 and an 11-match unbeaten start – the club’s best ever – proved invaluable as Stamford accumulated a record 18 draws over the season, eventually finishing 17th in the table.

Seventh place in the 2003/04 season was enough to earn the Daniels a Premier Division place for the first time in their history. Unfortunately, too many draws proved costly as Stamford were relegated. In July 2005, new manager Graham Drury arrived from Harrowby and his new look side regained the club’s Premier Division place at the first attempt. After finishing fourth in Division One East the Daniels defeated Wivenhoe to progress through the Play-offs. Stamford fared much better on their return to the Premier Division & briefly topped the table in January.
In 2006/07 the season ended with silverware on display as the Daniels claimed their fifth different county cup, beating Brigg to win the Senior Shield at Lincoln City’s Sincil Bank Stadium.

In the summer of 2007, the club was transferred to the NPL Premier Division after nine years playing in the Southern League but suffered instant relegation to Division One South after losing manager Graham Drury.

Graham Drury returned to take over as manager within a couple of weeks of the 2011/12 season ending. Graham departed for Boston United in December 2012. He was replaced by Wayne Hatswell in January 2013, which culminated in the club gaining promotion via the Play-offs defeating Chasetown in the Final. We then had another managerial change with Hatswell leaving for a coaching role at league 2 Newport County. His deputy David Staff was promoted for his first managerial position for the 2013/14 campaign. The season culminated in winning the Lincolnshire Senior Trophy in the final against Brigg Town.

The 2014/15 season was started at our Wothorpe Road ground, and we played out last game there on the 22 November before moving to our new home at the Zeeco stadium.

On 13 December 2014 we started a new chapter of the club’s life with our first game at the Zeeco Stadium. Unfortunately, it took us longer than expected to get that first home league win - it came down to the last game of the season against Witton Albion when the win was the only way to say in the Premier Division.

The 2015/16 season was the first full season at the Borderville Sports Complex. This was a turbulent season which saw David Staff replaced by Andrew Wilson whose tenure only last 10 games and saw him being replaced by Graham Drury for his third stint with the club. Despite an upturn in form it was not enough to stop the Daniels being relegated.

In 2016, club history was made when Stamford made the first-round proper of the FA Cup by beating Wrexham in a replay at the Racecourse ground. They were drawn against Hartlepool United in the First Round, eventually losing 3-0.
The 2017/18 season saw the Daniels finish sixth in the league and saw them reach the Play-off Final losing 2-1 in extra-time to Bedworth United.

2018/19 season was disappointing for the Daniels, an early exit from the FA Cup was offset with getting through three rounds of the FA Trophy. In the league, the Play-offs were never really threatened and Stamford finished mid-table.