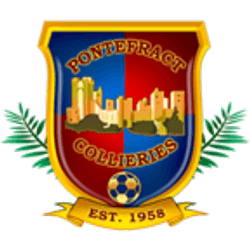 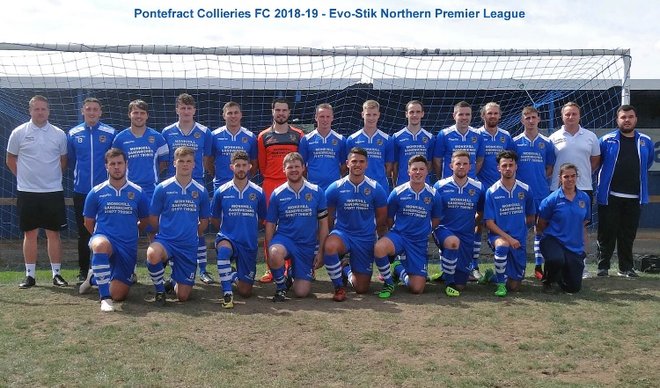 Pontefract is known to have had a football club as far back as the 1890s when a side, presumably composed mainly of soldiers, completed in the West Yorkshire League as Pontefract Garrison. Much of the history requires further research but it is known that a Pontefract Borough Club reached the dizzy heights of the Yorkshire League in the late 1920s. By 1935 a club called Tanshelf Gems managed to acquire a ground on Ackworth Road, moved there and became Pontefract United.

The current club was formed in 1958 enjoying considerable success on and off the field, much work being done during the miners’ strike cementing relationships with the mining industry and the local community. The floodlight opening in 1987 saw the Colls take on Hull City in a friendly watched by a record crowd of 1,000.

2012/13 – The season ended with only one defeat in the last ten games including victories over Askern Villa of 9-0 and 10-2. The club finished 5th for the third season in a row.

2014/15 – The plan was delivered as the Colls finished as runners-up in North Counties East League Division One and were promoted back to the NCEL Premier Division after a 15 year absence. Along the way they recorded the highest away win, best aggregate score, most goals scored (joint with Louth Town), 2nd best defence and the most clean sheets.

2015/16 – The latter part of the season saw the Colls with a new management team of Craig Parry, Manager and former Colls Keeper, assisted by Craig Rouse and Nigel Danby. The Colls fought to the bitter end but ended up third from bottom and back in Division One.

2016/17 – A great start to the season led by Manager Craig Parry, Assistant Manager Craig Rouse and Head Player/Coach Luke Jeffs saw the Colls win 9 from 9 (including pre-season friendlies) The League performance saw some brilliant runs of form including one of 21 games with only one defeat. With the Colls fate in their own hands they only needed to win away at Worsborough Bridge in the final game. This they duly did and returned to the NCEL Premier Division at the first time of asking.

2018/19 – After 2 consecutive promotions the Colls had an extremely successful first ever season at Step Four of non-league in the NPL Division One East finishing as runners-up to Morpeth Town. A good pre-season saw the Colls gain 2 pieces of silverware – The Bill Cook Memorial Trophy against Glasshoughton Welfare and the Inaugural Colliery Cup from a keenly contested game against NPL Division One West side Atherton Collieries. The Colls narrowly lost out on promotion to the NPL Premier Division at the first time of asking after losing to Brighouse Town in the Play-offs.

A great squad has been assembled from both retained and incoming players and all are looking forward to the challenge of the 2019/20 season in the NPL North West Division.