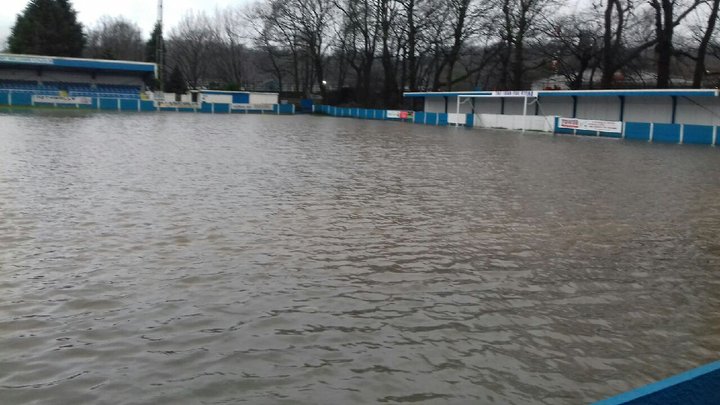 BetVictor Northern Premier N/West Division leaders Ramsbottom United found themselves deluged with a pitch resembling a lake, barely hours after an important 3-0 win over Tadcaster Albion, who also found their ground under water on Sunday morning.

It is the third time in the past decade that Rammy have been flooded, including the horrendous floods that sank the ground on Boxing Day 2015.

Whilst work had been carried out by the relevant authorities to ensure a similar problem to the five foot flooding that the Harry Williams had previously suffered would not happen again, the work was obviously not sufficiently carried out, as more overnight rain saw the adjacent River Irwell burst it’s banks once again, with the resultant flood covering most of the Rams pitch.

Although not as bad as the 2015 disaster, it was similar to the soaking that was felt back in 2012, but hopes are high that the weather is about to clear up and the drainage on the pitch will work sufficiently well to allow next Saturday’s home game against Ossett United to go ahead.

BetVictor Northern Premier S/East Division sides Carlton Town and Wisbech Town have also been hit, with the Cambridgeshire side appearing on Sky Sports News after receiving significant storm damage to one of their stands.

Several other clubs have also reported damage, with a number of games also postponed already for Tuesday night due to high winds.

RIP John Eastment  The Northern Premier League would like to pass on its condolences following the passing of Southern League stalwart John Eastment.