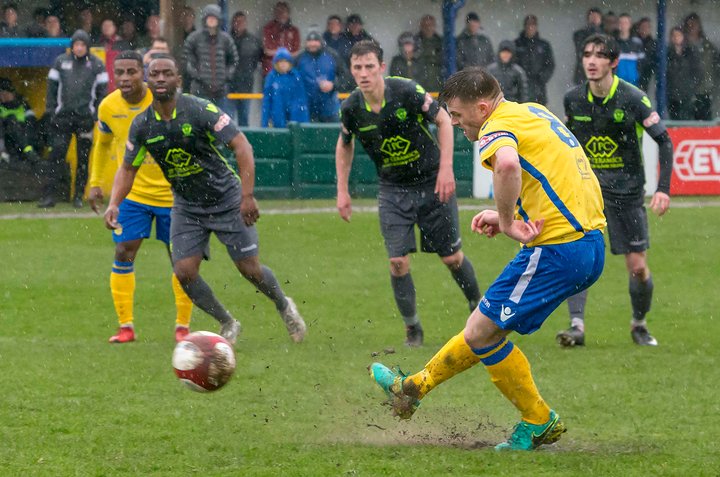 Warrington Town moved to within five points of leaders Altrincham in the EVO-STIK League Premier on a Bank Holiday Monday when only four fixtures survived the wet weather, writes Pitchero's Steve Whitney.

However, the Wire will be disappointed not to have narrowed that gap to just three points as they were pegged back by a late equaliser from visiting Witton Albion at Cantilever Park.

In front of a crowd of 479, Steven Tames gave Albion a great start with a goal inside three minutes. Devarn Green equalised half-an-hour later and then Steven Jennings` penalty after 56 minutes looked as if it had won it for Warrington. But Tom Owens grabbed an 86th minute equaliser to lift Witton into the play-off places.

Third-placed Grantham Town came back from a goal down to beat play-off chasing Shaw Lane AFC 3-1 at The Meres.

And the Gingerbreads also had to come back from a goal down as Kieran Lugsden put the Ducks in front after 12 minutes. It wasn`t until just shy of the hour-mark that Lee Shaw equalised and then the same player gave the hosts a 73rd minute lead. The majority in the 484 crowd could relax a little when Jordan Hempenstall added a third six minutes from time.

Workington AFC`s outside play-off hopes are still alive after they won 2-0 at Borough Park against mid-table Lancaster City.

Matty Douglas broke the deadlock to put the Reds in front after 69 minutes. Rob Wilson added a second to ensure the points stayed in Cumbria in the last minute of normal time.

Sutton Coldfield Town are almost down after a 3-1 Coles Lane defeat to Nantwich Town left them nine points adrift of second-bottom Halesowen Town with only twelve points to play for – the Yeltz possessing two games in hand.

The Royals fell behind after just five minutes to a Justin Cole effort. Sam Wakefield doubled the Dabbers` lead after 32 minutes and veteran Steve Jones added a third six minutes before the break. Toby Mullarkey`s own goal six minutes into the second half was Sutton Coldfield`s only response.