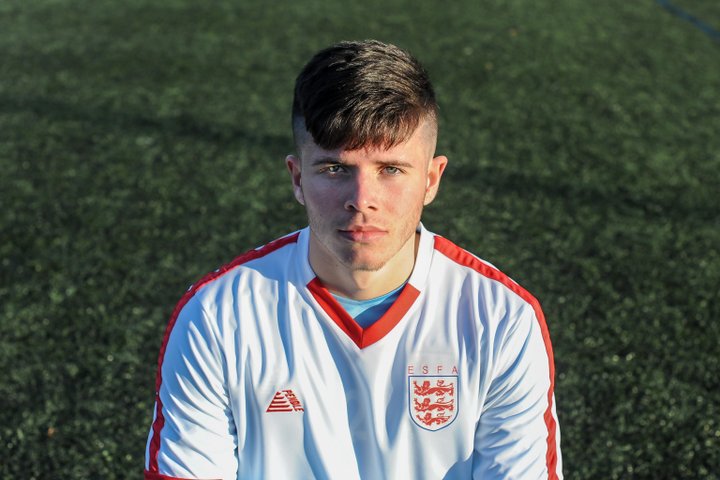 South Shields Academy prospect Mathew Wade has told of his pride after being selected to play for England Schoolboys.

Mathew is the first SSFC Academy player to receive international recognition and will link up with others who have been selected from around the country in January.

The 17-year-old has had a hugely successful season to date, having helped the young Mariners reach the third round of the FA Youth Cup and made his first-team debut in the Durham Challenge Cup in October.

It has been a remarkable comeback from injury for the defender, who was on the sidelines for most of the 2018-19 campaign.

His hard work, both on and off the pitch, is now paying off.

Mathew said: "Being called up by England Schoolboys is a great feeling for me and my family.

"I've had to work so hard and I'm finally getting some recognition for what I'm doing.

"To represent your country is a massive honour and it's something I'll remember forever."

Mathew successfully made it through three trial rounds to earn selection in the national squad.

After impressing as one of the north of England's players in the final trial, which was held at Rowley Park, Stafford, his place in the national squad for the 2019-20 campaign was confirmed.

The squad will begin their time with England with friendly fixtures against the RAF on January 12 and Australia Schoolboys on January 25, with two more friendly matches to be played.

The players will then head away on preparatory training before their competitive games in the Centenary Shield against Scotland, Wales, Northern Ireland and the Republic of Ireland in April 2020.

Mathew had come a long way in a short space of time following his injury frustration in 2018-19.

He added: "Last season I fractured my tibia, dislocated me kneecap and tore my medial ligament twice.

"It was a tough season and I only played twice, but I put the work in behind the scenes and in the gym to come back strongly this season.

"You've just got to focus and get your head around it.

"You might need a week away but once you get your focus and get going, it's easy to keep going again and that's what I'd say to any young player going through injury problems."

Ahead of linking up with England, Mathew is expected to be part of the Shields side which heads to Fulham in the third round of the FA Youth Cup next Wednesday.

He also continues to train regularly with the Mariners' first-team, and was on the bench for the recent win at Stafford Rangers in the BetVictor Northern Premier Division.

His success is a prime example of what can be achieved through resilience and hard work, according to South Shields Academy and Recruitment Manager Wess Brown.

He said: "It's a fantastic achievement from Mathew.

"He has had his setbacks through injury and it shows what can happen if you bounce back and show a bit of resilience and a willingness to work hard.

"He has worked fantastically hard to get to where he is and everyone at the club is really pleased for him.

"Matty had a bad knee injury last season, came back and was injured again to the same knee.

"He worked fantastically hard in the gym to get himself into a real good physical shape, and not once did we think he would let it get him down.

"He has progressed fantastically well since coming back."