Frost on the mend after head injury 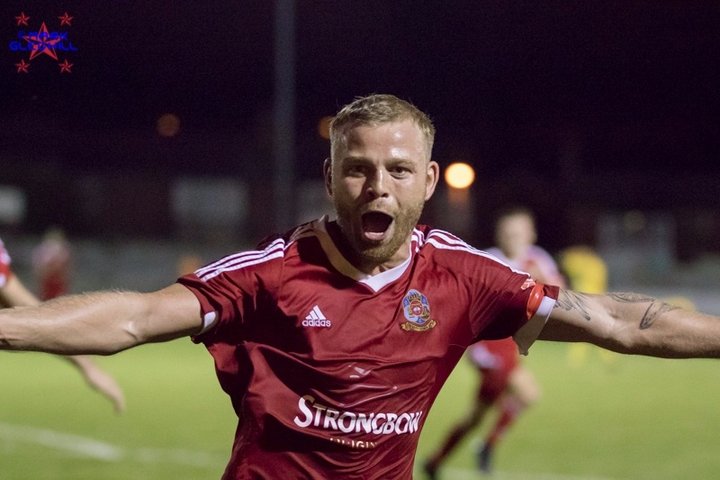 The 29-year-old hot-shot, pictured, was reported to be "talkative and responsive" by relieved Trafford officials within an hour of being hurt before leaving Llanelian Road by ambulance for treatment at nearby Glan Clwyd Hospital.

An air ambulance from Caernarfon had originally been called to ferry the player to hospital after he slid head first into a wall soon after the hour mark with the hosts leading 2-0. With Frost conscious but in a bad way, the EVO-STIK League North clash was abandoned by referee Kristian Silcock soon afterwards while he was being treated on the pitch by the medics of both clubs.

Confirming Frost's condition had improved, @FCTrafford tweeted: "Update: Danny is being taken to a local hospital and the great news is that he is talking and responsive. Thanks for all the good wishes which are really appreciated."

Singling out out one of the match officials for special praise, the club added: "We would like to say “thank you” to Assistant Ref Zharir Mustafa who, with his quick reaction to go to the aide of @DannyFrosty07 undoubtedly prevented an unthinkable outcome this afternoon. Words can’t express the gratitude of us all."

The Seagulls also praised match officials and their own staff as fans left the ground after wishing Frost a swift recovery, @ColwynBayFC tweeting: "Get well soon Danny. Thank you to the referee’s assistant who reacted instantly to Danny Frost’s terrible injury today - you were amazing! Also to Colwyn Bay juniors coach Danny McGoona and both medical teams for their superb help. Also big thanks to our stewards."

Signed in February from Frickley Athletic, the popular forward has played for a host clubs since kicking off his career at Barnsley, the list including Bradford Park Avenue, Gainsborough Trinity, Ossett Albion, Ossett Town, Pontefract Colliery, Shaw Lane, Tadcaster Albion and Winterton Rangers.

 Corks popping but title is priority Basford United manager Martin Carruthers was setting his sights on the EVO-STIK League South title within minutes of seeing his side secure promotion on Saturday.

Listen live and log on for updates!  Log on for live commentary from seven of Saturday's big matches and stay in touch with the action from elsewhere on the EVO-STIK League's social media channels!