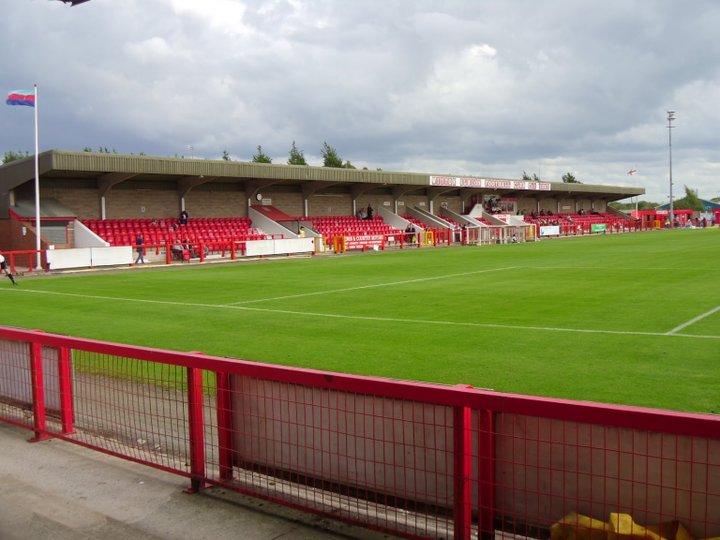 Instead of travelling 18 miles to their current temporary home at Flixton on the outskirts of Manchester, the First Division North Vics will be kicking off in their hometown at Albion's Wincham Park from August.

Under the terms of an initial three year deal, Vics will play all their home league and cup games at the ground, pictured, an arrangement that worked successfully for both clubs in the early 2000’s.

Hailing the news, a Vics spokesman said: "We are delighted to be returning to the town and would like to put on record our sincere thanks and gratitude to everyone at Witton Albion for the way in which negotiations were carried out and concluded in a very understanding and professional manner.

"Northwich Victoria have found that the time spent away from its home town have proved extremely difficult and we are more than ready to return. Witton Albion have made that possible for the foreseeable future which we hope will prove successful period for both clubs.

"We would like to thank the Vics supporters who have managed to travel with us during our enforced exile and welcome back those who for a variety of reasons were unable to make the journey but continued to keep Northwich Victoria close to their hearts. We look forward to seeing you all and to creating the next chapter in a long and proud history."

Witton Albion chairman Mark Harris echoed the sentiments of the Vics and believes the arrangement is fantastic news for both clubs.

Welcoming Wednesday's announcement, he said: "We have been looking for partner to share Wincham Park for some time. In the modern era it makes total sense for competing clubs to share facilities, providing that the deal works for both parties – especially financially. This agreement will provide a sound basis on which to build the revenue necessary to invest in both the team and the stadium’s facilities.

"No club enters into a ground share agreement lightly. We have carefully evaluated the ramifications in terms of extra workload for our volunteers, pressure on the playing surface and additional commercial opportunities that two local clubs playing in on stadium provides. We have also built in the necessary safeguards to protect the additional revenue that this agreement brings."

Harris, who is also chairman of the EVO-STIK NPL, added: "Witton Albion has a recent history of successful ground shares, both with Vics and Runcorn Linnets, so we know that they can work very well for both parties. We look forward to welcoming Vics to Wincham Park next season."