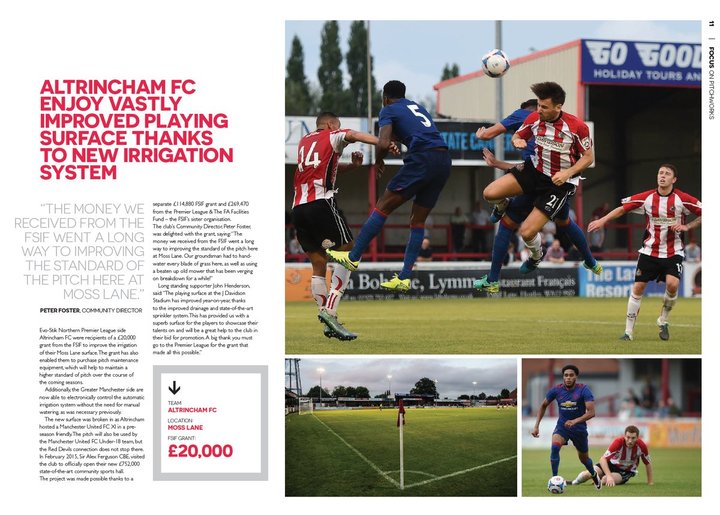 EVO-STIK League leaders Altrincham are making headlines off the pitch ahead of the weekend's action in the Football Stadia Improvement Fund's 2017 Focus magazine.

The EVO-STIK League Premier Division club's media team received an early publicity present for Christmas on Thursday when the £20,000 grant spent on improving their Moss Lane pitch was the subject of a double page spread in the FSIF's glossy 2017 annual review.

Broken in when the Robins hosted a Manchester United XI in a pre-season friendly this summer, the surface now benefits from an electronically controlled water irrigation system as well as new pitch maintenance equipment purchased with the Premier League-funded and Football Foundation-administered grant.

Altrincham's community director Peter Foster and long-standing fan John Henderson are both interviewed for the review which came out this week as the Robins prepared to take a break from their title ambitions at Warrington Town in the Buildbase FA Trophy on Saturday.

Singling out their over-worked groundsman as one of the main beneficiaries, Foster tells the review's readers: "The money we received from the FSIF went aloig way to improving the standard of the pitch here at Moss Lane. Our groundsman had to hand water every blade of grass here, as well as using a beaten up old mower that has been verging on breakdown for a while!"

Henderson said: “This has provided us with a superb surface for the players to showcase their talents on and will be a great help to the club in their bid for promotion. A big thank you must go to the Premier League for the grant that made all this possible.”

 Lilywhites and Latics back appeal EVO-STIK League Mossley have teamed up with the Oldham Athletic Community Trust to back their local foodbank's Christmas appeal.

New chairman bringing Davies back  EVO-STIK League Market Drayton Town are hoping the good times are on the way back with Martyn Davies set to return as manager next week and a new chairman in place this weekend.