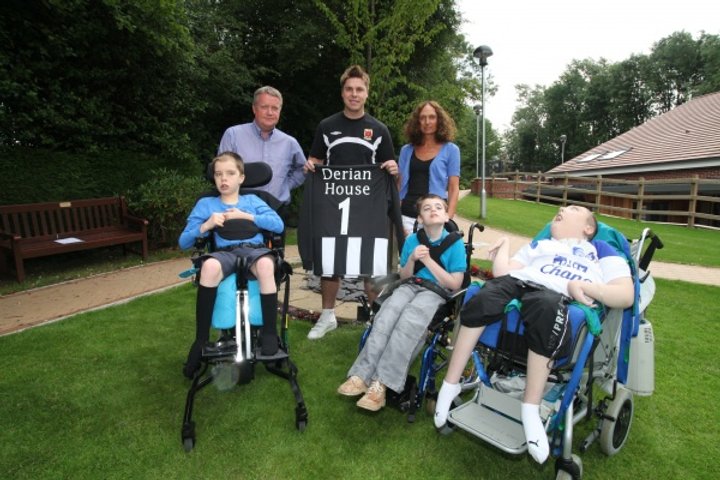 CHORLEY Football Club is teaming up with one of the town’s best-loved charities in a unique partnership deal that is set to make Non-League history.

The name of Derian House Children's Hospice will be emblazoned across the Magpies’ home shirts for the coming season, instead of a commercial sponsor.

And the EvoStik Premier Division new boys have also pledged to raise £10,000 for the hospice over the next 12 months.
The move echoes Spanish giants Barcelona, who bore the Unicef crest on their shirts three years ago.

Chorley FC manager Garry Flitcroft said: “Derian House does some amazing work and it is clearly close to a lot of people’s hearts, both in the Chorley area and further afield. “We hope by putting their name on our shirts it will help to raise their profile and prompt more people to support them financially.”

Local businessman Ian Currie was instrumental in forging the partnership after he agreed to underwrite the sponsorship in return for having Derian House’s logo on the front of the Magpies’ home shirts next season.

The club then took the idea a step further by pledging to raise £10,000 for the hospice over the next 12 months.
Some fundraising initiatives have already been set in place.
The Magpies will donate their slice of the gate receipts from a pre-season friendly with local rivals Bamber Bridge later this month. They have also agreed to donate 10 per cent of the profits from every new replica home shirt sold during the 2011/12 season.

Garry added: “We didn’t just want to stick Derian House on the front of our shirts and forget about it, we wanted to pledge some financial support too because we see this as very much a partnership. “We’ve got a firm plan in place and our aim is to raise £10,000 over the next 12 months.

“We’ll be releasing more details shortly about how we plan to do it, and how our fans can get involved if they want to. “With so much interest in the club at the moment, we just felt it was the perfect time to do something like this.”
Flitcroft announced the partnership at a special press conference, which was staged at the hospice.

Fundraising Manager, Susie Poppitt said: "We're delighted that Chorley Football Club has chosen to support Derian House in this way, and really appreciate their involvement with us. The club is clearly going from strength to strength and we are really excited about our partnership with them throughout the coming season."

Derian House provides specialist care for children with life threatening and terminal illnesses, and support for their families throughout Lancashire and South Cumbria, and with £2.6 million required this year to continue to provide this support, and less than 10 per of funding available from statutory sources, the charity depends on this vital support from individuals and businesses in the community.