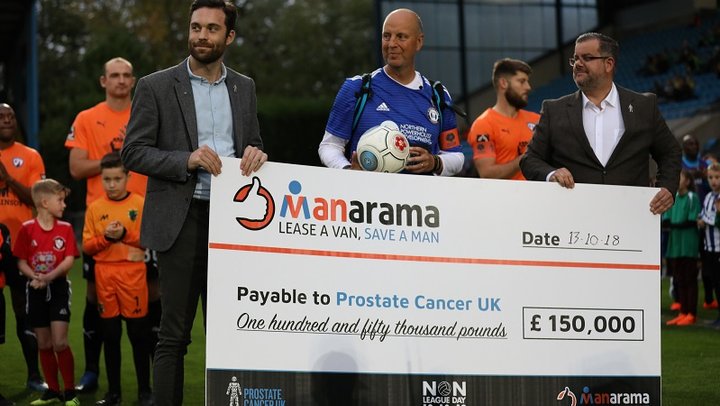 For the second successive October, Non-League football obsessives Vanarama are rebranding to MANarama - and once again we want to help raise bucket loads of money for a very worthy cause.

Last year, Vanarama - the official vehicle leasing partner of the BetVictor Northern Premier League - teamed up with Prostate Cancer UK and the country’s Non-League clubs to raise a fantastic £150,000 to help the fight.

We were proud to play a part and thanks to so many people it was a job well done, but there’s one issue - we soon remembered that the disease kills one man every 45 minutes in the UK.

So we couldn’t just sit back a year on think we’ve done our bit. Far from it in fact!

We’re back with a six-week campaign and we’ve got a rather famous face to help spread the message as we try to raise awareness as well as much-needed money.

Film star and former Non-League footballer Vinnie Jones’ life has been touched by cancer recently and it’s something he was desperate to put his name to.

Now he is urging ‘proper football clubs’ and ‘proper supporters’ to raise ‘proper money’ - you can’t say no to Vinnie, right?!

He said: “I am beyond proud to back this MANarama campaign. It combines two things which are so important to me; grass-roots football and fighting cancer. I started playing football in Non-League so I know that these clubs are at the heart of local communities.

“I don’t need to explain why the fight against cancer is so important for me.

“Non-League football is proper football and I’d urge all Non-League clubs and all the proper supporters out there to raise some proper money for this brilliant cause.”

So how can you help?
We need you! So get involved with the MANarama campaign as we try to combat Prostate Cancer together.

Give... donate to Prostate Cancer via text
Go... then bring others into play by sharing on social media with #GiveAndGo.