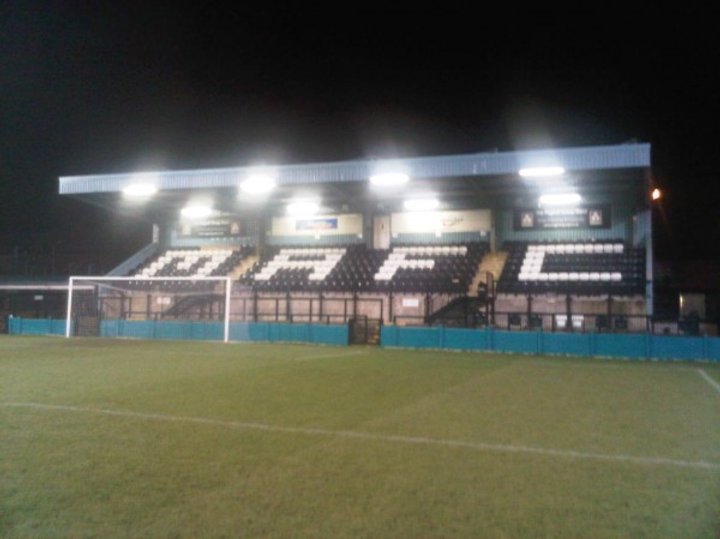 Evo-Stik Northern Premier League Marine have been hit by another floodlight fire after Tuesday’s home game against Northwich Victoria.

This is the third floodlight fire to hit the Club in the last two years. The floodlights are 35 years old and were due to be replaced in the summer of 2012.

Emergency fire services were called, the electric supply to the floodlights was switched off and the fire dissipated on its own.

Marine officials have contacted floodlighting engineers who are to inspect the damaged electrics to the floodlight tower in the next couple of days and it is hoped the repairs will be completed before the next night game against Bradford Park Avenue on September 7th.

Planning approval was granted by Sefton Council earlier in the year for a new floodlighting system in addition to a new stand and snack kiosk and the Club launched a £100k fundraising appeal in March.

Marine Chairman Paul Leary said, “This is now a critical situation for our football club. Had the fire started during the game we would have had to evacuate the stadium and the game would have been abandoned. The installation of the new floodlighting system now takes absolute priority and is required as a matter of real urgency as we cannot now rely on the performance of the existing lights. The plans for the building of a snack kiosk and new stand will be put on hold whilst we concentrate on our efforts to raise funds for the new floodlights.”

He added,“I appeal to our fans, the public, our suppliers and customers to make donations to our ground appeal in a real effort to help fund the installation of the new system as quickly as possible.

"The immediate target now is to raise £40k through donations which will cover at least 50% of the cost of the new system and the remaining balance is hoped to be covered by grants from the football authorities. So far the fund stands at £9,150 so we still have over £30k to find. If anyone would like to make a donation to the appeal then cheques should be made payable to “Marine FC Ground Appeal” and should be sent to Joint Hon. Treasurer, Mr RG Kewley, 53 Seafield Avenue, Crosby, Liverpool L23 OTG.

"If anyone would like to organise a fundraising event for the appeal please contact Club President Jean Pierre Hall on 0151-924-4448.”