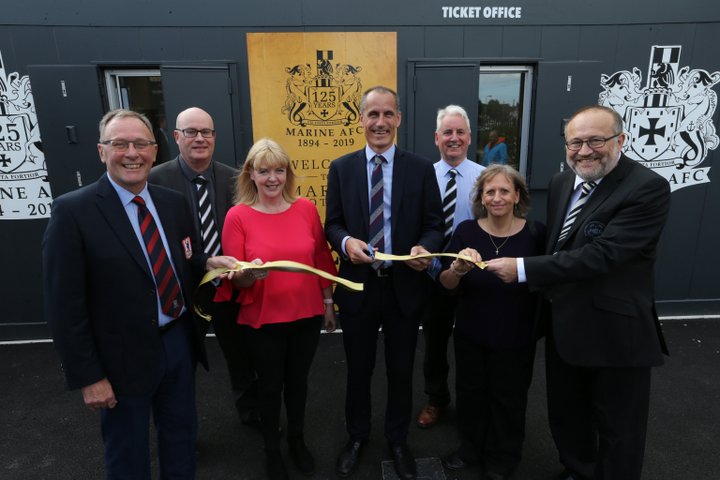 Marine unveiled their new stadium improvements when they kicked off the season against Dunston on Saturday.

A new clubhouse building has been built to replace the previous single-storey clubhouse at the rear of the main stand, which was demolished having been originally erected in 1929.

Club Chairman Paul Leary said: “We are really proud to be opening our new facilities funded by the Football Stadia Improvement Fund and the Premier League and especially that it coincides with our 125 anniversary.

"I am delighted that Bill Esterson our local MP, Mark Harris Chairman of the Northern Premier League and Dave Pugh CEO of Liverpool FA were able to attend our opening ceremony and share with us our excitement at the official opening of our superb new facilities.”

The new facilities include a kitchen area and servery for spectator use on matchdays, a spectator first aid room and office space in unit one. The second unit features a club shop and counter area, whilst the third unit is a hospitality and seating area, including facilities for disabled spectators. New turnstile units have also been installed at The Marine Travel Arena to give the ground a complete facelift for the new season.

Marine FC have played at The Marine Travel Arena since 1903 and the improvements made to the ground were required to ensure that the club continues to provide the required facilities to adhere to Grade C of the FA National Ground Grading Criteria, applicable to their league position.

Peter McCormick OBE, Chairman of the Football Stadia Improvement Fund, said: “I am delighted to hear that Marine FC have been able to install the various new facilities at The Marine Travel Arena and that this will be of huge benefit to its spectators. This is the first Premier League grant, through the FSIF, that the club has received and it’s excellent to hear of the good that this money is doing.

“The FSIF works to improve the standard of stadia across lower levels of the game, which is only made possible through the investment of the Premier League. This is benefiting players and spectators alike, and I’m glad to hear that Marine FC is amongst them."
All of the upgrades were made possible by a £82,813 grant from the Premier League, which has been delivered by the Football Stadia Improvement Fund (FSIF).

 Midweek Radio Commentaries 10 matches on the airwaves this evening

Matlock and Marske go two from two  Matlock Town and Marske United made it two wins from two in the BetVictor Northern Premier on Monday night.