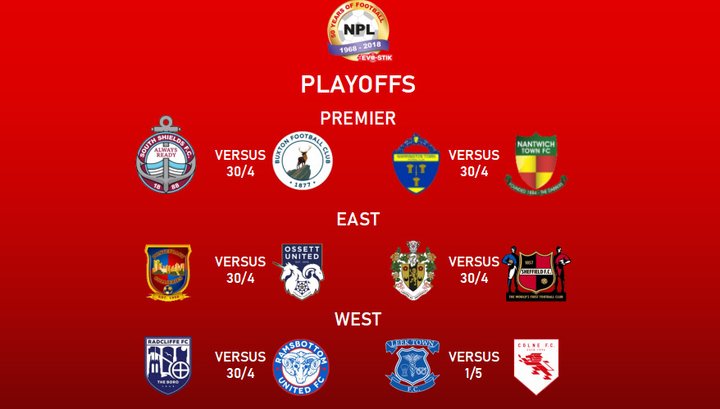 The EVO-STIK League enters the play-offs following the completion of the regular season over the weekend.

In the Premier Division, South Shields and Warrington Town will be at home to Nantwich Town and Buxton, after Farsley Celtic prevailed in a thrilling title race.

Whoever wins the Premier Division play-offs will then have to proceed to a so-called "super play-off" against their Southern League Central equivalent.

Pontefract Collieries boast the best chance, having come second in the East Division, and they host Ossett United, while Brighouse Town face Sheffield.

In the West Division, late drama on the final day meant Leek Town secured a home tie against Colne, with Ramsbottom United travelling to Radcliffe.

All games will be played on Tuesday 30 April (7.45pm) unless otherwise stated

 Golden Boot winners There are four winners across the three leagues of this season's EVO-STIK League Golden Boot race.

NPL monthly show - "Permutations..."  The monthly review edition of The Evo-Stik NPL Show returns for it's April podcast, as we discuss all the various permutations heading into the final weekend of the regular season in all three NPL Divisions.