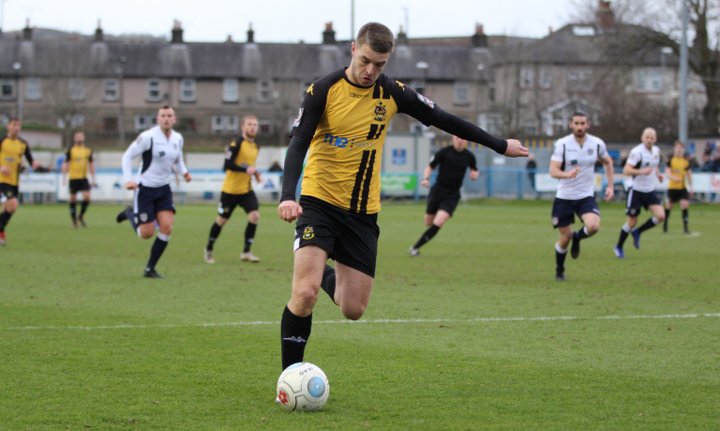 Jason Gilchrist scored a brace as South Shields defeated Lancaster 2-1 in the top of the table clash in the BetVictor Northern Premier League.

The striker twice gave the Mariners the lead, opening the scoring in the 11th minute before Robert Wilson’s first half penalty levelled the scores at half-time.

However, the Dolly Blues were unable to repeat their November victory at Mariners Park as Gilchrist’s second in the 70th minute was enough to take the three points back up north.

“We came here knowing it was going to be a big game. First versus second, we knew that they needed to win that game,” said Gilchrist, speaking to MarinersTV.

“They came out and gave us a real test in the first half, but I think we tried to stand up to it and in the second half we stood up to it and picked it up.”

Six points now separate the two sides, whilst Basford are now on joint points with Lancaster following their 3-2 victory over Stalybridge Celtic.

Stalybridge let a 2-0 first half lead slip, as Kane Richards levelled the scores with a brace, before Stephen O’Halloran scored an unfortunate own goal.

Kyle Hawley made a dream debut from the bench for FC United of Manchester, scoring a later winner at Whitby Town to claim their seventh consecutive victory in the league.

“If you were here today, or listening on the radio then you may not agree, but that for me was one of the best performances of the season today,” said manager Neil Reynolds.

“The reason why, the mental toughness of the group has come back after last week’s performances to get around each other and turn up today.”

Elsewhere in the play-offs, Josh Amis returned to action for Warrington Town from the bench following a lengthy injury and he scored an injury-time goal for a 2-2 result against Stafford Rangers.

Gainsborough Trinity continued their fine form and made it seven unbeaten in the league following a 2-0 victory away to Radcliffe.

Ashton United look to climb out of the relegation zone as they defeated Morpeth 4-1, while Mickleover Sports also defeated Grantham 4-1.

Bamber Bridge claimed the three points over Buxton with a 2-1 result.