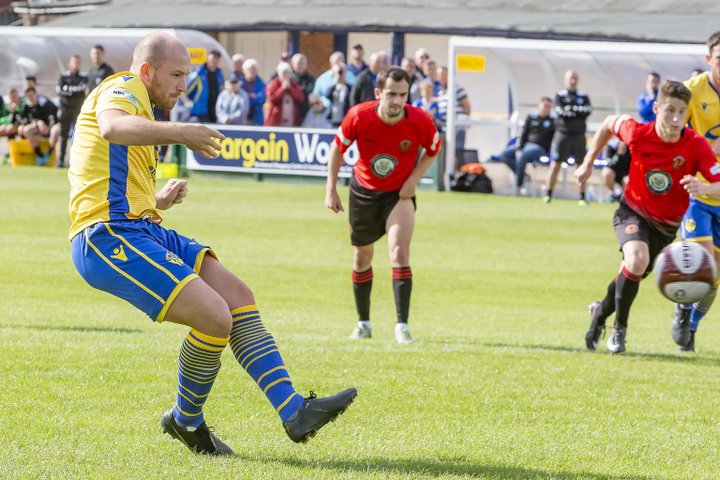 Matlock Town are the final remaining unbeaten side in the BetVictor Northern Premier following the fifth round of games.

The Gladiators did, however, drop points for the first time this season as they were held 1-1 by Ashton United, who still remain without a win five games in to their return to the NPL.

They led in this one, Josh Wilson’s first half penalty giving them the lead, but Marcus Marshall earned a point for Steve Kittrick’s side.

Nantwich Town lost their unbeaten record, as they were beaten 3-1 at Atherton Collieries, who secured their first ever win at this level.

Vincent Bailey’s brace put Colls in control, before James Lawrie’s goal on the stroke of half time changed the picture of the match.

But Colls stood firm, and they made sure in stoppage time through Oliver Roberts.

Grantham Town started the weekend unbeaten, but that record was ended in extraordinary fashion, as they were thumped 4-0 at home by Whitby Town.

The damage was done in the first half, Arran Wearmouth’s fifth minute opener followed by a Bradley Fewster brace, and Daniel Rowe’s second half strike made it a very happy journey home.

There were goals aplenty overall - South Shields were another of the five sides on the afternoon to hit four. All of their goals came in a blistering 10 minute first half spell that put paid to Bamber Bridge.

Gary Brown opened the scoring on 28 minutes, and by the time Josh Gillies converted a 38th minute penalty, it was 4-0. Daniel Wisdom did get a penalty for Brig in the second half.

That win puts Shields third on goal difference, just ahead of Whitby, and also their foes of last season, Warrington Town, who moved on to 10 points with a 1-0 win at home to Mickleover Sports.
Matthew Chadwick’s first half penalty was enough for the Yellows to record their third win of the campaign.

In second place are Hyde United, whose impressive start to the campaign continued with a 4-0 dismantling of Stafford Rangers.

It took more than an hour for the stalemate to be broken, Liam Tongue giving the Tigers the lead, but they cut loose in the final 11 minutes, adding further goals through Daniel O’Brien, Jack Dyche and Thomas Pratt.

Tunde Owolabi, prolific in the league below for Radcliffe last season, marked his debut with a goal inside five minutes, and he added a second on the half hour mark, after Ben Harmison and Paul Ennis had exchanged goals.

That became 3-2 shortly before the hour thanks to Joe Walton’s penalty, but a spotkick from Ennis restored FC’s two goal advantage and they held on.

The fifth team to hit four were Lancaster City, who blitzed Gainsborough Trinity in the first half before eventually winning 4-2.
Veteran midfielder David Norris scored a hat-trick, 19 years since his first as a professional, to give the Dolly Blues a 3-0 lead that never looked like being harmed.

No sooner had Branden Horton pulled one back for the Holy Blues, Jason Walker had restored Lancaster’s three goal advantage.

Despite all the goals elsewhere, there were two goalless draws - Buxton and Stalybridge battled a 0-0 out at Silverlands, while Witton picked up a point in a stalemate at Scarborough Athletic.

Like Buxton, Radcliffe remain winless alongside Ashton and Stafford, after losing 1-0 at Basford United. Matthew Thornhill scored the only goal of the game on 73 minutes.

 Sports land Hughes Veteran striker Lee Hughes made his debut for Mickleover Sports against Warrington Town at the weekend.