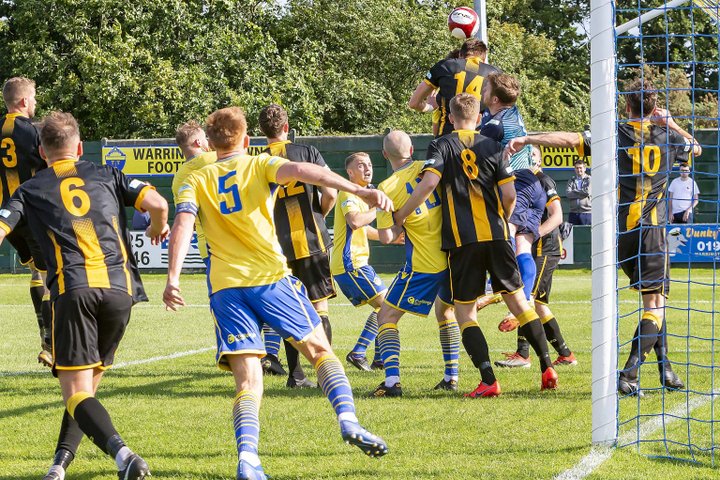 Sean Reid scored an early contender for goal of the season, lashing home a 30-yard volley on the stroke of half time to give the Highwaymen the lead.

They would double that through Jack Foalle barely two minutes after the restart, and that proved too much for last season’s play-off winners to come back from, despite skipper Mark Roberts pulling one back in the second half.

Summer signing Ben Harmison made sure for Morpeth late on, scoring seconds after coming on as a substitute in a real statement performance by the reigning East Division champions that suggests they may well follow the lead of some of their north east counterparts in recent years.

Basford United got their season off to a winning start as they won 3-2 away at Hyde United, to make it an unhappy first game as manager for new Tigers boss David McGurk.

It looked like it might be their afternoon early on, as Hyde took the lead in the fourth minute through Dan O’Brien, and they dominated the early exchanges.

Louis White’s late free-kick pulled a goal back but it was too little too late for the hosts.

The other team to win away from home were pre-season title favourites South Shields, who overcome the sending off of new signing Jason Gilchrist to win 1-0 at newly-promoted Radcliffe.

Gilchrist saw red for an “altercation in midfield” off the ball on 34 minutes, but despite their numerical disadvantage, Shields took the lead through Robert Briggs six minutes in to the second half.

The game had been subject to an eventually cancelled pitch inspection after torrential rain on Friday, the hosts no doubt breathing a sigh of relief that it could go ahead in front of the 604-strong crowd.

Hopes of a Radcliffe come back were hit on 71 minutes when Harry Winter was sent off for a second bookable offence, and Shields held on for the win.

FC United started life back in the NPL with defeat, as Grantham Town came from behind to beat them 3-2.

The Gingerbreads led after seven minutes through Craig Westcarr, but goals from Nialle Rodney and Regan Linney put the Reds in front.

Westcarr struck a second from the penalty spot 12 minutes from time to level things up, and Tom Ward snatched the three points for new-look Grantham a minute from time.

Fellow returnees Ashton United also failed to register a win on the opening day as they were held to a 2-2 draw by newly-promoted Atherton Collieries.

Sam Sheridan twice fired the Robins in to a second half lead, only to be cancelled out by debutant Brad Lynch and Oliver Roberts.

Lancaster City got their season off to a winning start with a 2-1 home win over Stafford Rangers.

Robert Wilson’s early goal and Jack Armer’s strike just after the half hour mark put them in control early, and Evan Garnett’s goal five minutes from time was mere consolation for the visitors.

Matlock Town have made 14 new signings over the summer, but it was one of their old guard that struck the winner in the 1-0 win over Bamber Bridge.

Marcus Marshall scored the only goal of the game on 33 minutes to ensure that Steve Kittrick’s reign started with a win.

Two sides that survived relegation by the skin of their teeth at the end of last season went head to head on the opening day in Mickleover Sports and Stalybridge Celtic.

The game was settled inside the first two minutes, Jack Storer’s penalty proving to be the only telling contribution of the game.

Reigning young player of the year Joe Malkin scored a brace as Nantwich Town came from behind to beat Gainsborough Trinity 2-1.

Gavin Allott had given the Holy Blues a 54th minute lead, but Malkin scored twice in three minutes to get the Dabbers off to a winning start.

There were two late goals as Scarborough Athletic were held to a 1-1 draw by Buxton.

Martin Pilkington thought he had fired the Bucks to a win with a debut goal on 81 minutes in front of the largest NPL crowd of day, 1,157 at the Flamingo Land Stadium, but Jack Johnson popped up in the 89th minute.

There was also a 1-1 draw up the road at Whitby Town, who shared the spoils with Witton Albion.

Witton took the lead through Danny McKenna’s first half penalty, before Matthew Tymon restored parity two minutes in to the second half.

 N/West round up: Reds top list of five winners Workington got the BetVictor Northern Premier N/West season off to the perfect start as they beat Pickering Town 4-1 at Borough Park.