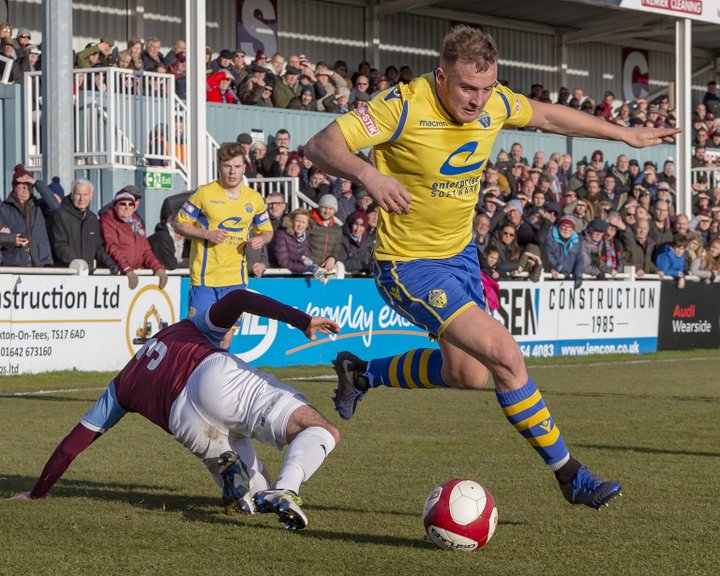 Josh Amis’ ninth goal in seven games and a stunning solo strike from Jack Dunn gave the Yellows a 2-0 lead in the first half, and although Nathan Lowe pulled one back before the break, the hosts couldn’t break Warrington’s resolve in the second half.

Maintaining their place at the top of the table on goals scored are Farsley Celtic, who came from behind to win 2-1 at Matlock Town.

On-loan winger Jonathon Margetts had put the Gladiators in front after just 11 minutes, before Will Hayhurst equalised. Jack Higgins popped up just four minutes from the end to secure a valuable three points for the Yorkshiremen, who on paper at least, have the more favourable run in amongst the title chasers.

An injury-time strike from Matthew Bell wasn’t enough to stop Nantwich Town slipping further back from the leaders, as they were held to a 1-1 draw at home to Scarborough Athletic.
The Seadogs led inside four minutes through Luke Lofts, with the late equaliser stopping them from leapfrogging the Dabbers in the table.

After parting ways with their management team during the week, Gainsborough ramped up the pressure on Scarborough in the final play-off berth with a nervy 1-0 win over Stalybridge Celtic.

Ashley Worsfold’s 14th goal of the season with just nine minutes to go was enough to move them within two points of the play-off places.

Basford United are starting to find their feet again after their festive season and early New Year struggles, and they recorded a third successive win in beating struggling Workington 3-0.

The league’s top goalscorer, Nathan Watson, hit 20 for the season with a first half penalty and two goals inside four second half minutes from Zak Goodson and Jack Thomas lifts Basford back up to seventh place.

Just behind them in the table is Buxton, who will still have a play-off place in their sights after a 3-1 win away at Lancaster City.

Bradley Grayson scored a brace, including one from the penalty spot, either side of Thomas Dean’s strike, with Ryan White scoring a late consolation for the Dolly Blues.

The form team in the league are Marine, who registered their sixth win in seven games as they won 1-0 at Hednesford Town.
Steven Irwin scored the only goal of the game just shy of the half hour mark as they made it seven games unbeaten, climbing up to 14th place and easing further any relegation concerns that were apparent at the start of the year.

Sadly for North Ferriby United, their relegation from the Premier Division is close to being confirmed as they were beaten 1-0 at Witton Albion, a result that leaves them 22 points shy of safety.

Will Jones first half goal was enough for Albion, who despite their mid-table berth, boast the second best defence in the league.

Mickleover Sports failed to make the most of Hednesford’s defeat as they went down 2-0 at home to Hyde United.
Deane Smalley scored on the stroke of half time to give the Tigers the lead, and Ross Daly made sure of the points in the 70th minute.

Stafford Rangers moved four points ahead of the relegation zone with a 1-0 win over Bamber Bridge, who themselves may be looking over their shoulders at those below them.

Jake Charles scored the only goal on 11 minutes.

Elsewhere, Whitby Town moved up to 11th with a 2-1 win over Grantham Town, thanks to goals from Daniel Rowe and Ashley Coffey.

Nominations now open for Fans' Player of the Year award  Fans can once again choose their stars of the 2018/19 season as the NPL Show Supporters Award is launched ahead of the NPL Player awards night.