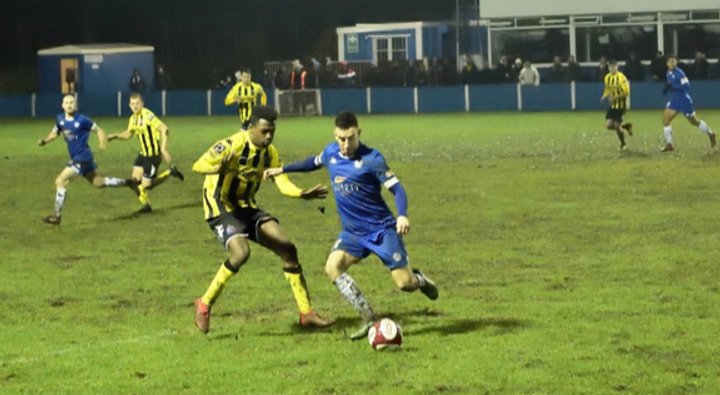 Ramsbottom United are still in the FA Trophy after an incredible 5-5 draw with National League side AFC Fylde.

The Rams twice fought from two goals down against their National League opponents to force a replay next Tuesday night.

The EVO-STIK League West Division side are the sole NPL representatives left in the competition, and a quarter-final tie against Carshalton Athletic or Barnet is at stake.

Fylde, currently fourth in step one, took the lead on 10 minutes when Serhat Tasdemir slotted home, and they doubled their advantage on 34 minutes when Nick Haughton picked up a stray pass and found the back of the net.

But the Rams roared back with two goals in two minutes. First, Luke Thompson scored with a great header and then Nic Evangelinos put the ball through a sea of bodies from a Tom Kennedy ball in.

They would go in at half time 3-2 down though, Jordan Tunnicliffe nodding the Coasters back in front.

More was to come from this extraordinary tie. Evangelinos scored on the hour to give Rams hope and then substitute Ruben Jerome poached five minutes later to make it 4-4.

There was delirium amongst the home fans on 83 minutes when Evangelinos grabbed his hat-trick to give them the lead for the first time, bundling home from close range.

However, there was still time for yet more drama, Fylde levelling three minutes later through Andy Bond to secure the replay.

Marshall could be out for season   Matlock Town’s play-off hopes have been dealt a blow with the news that striker Marcus Marshall could miss the rest of the season through injury.