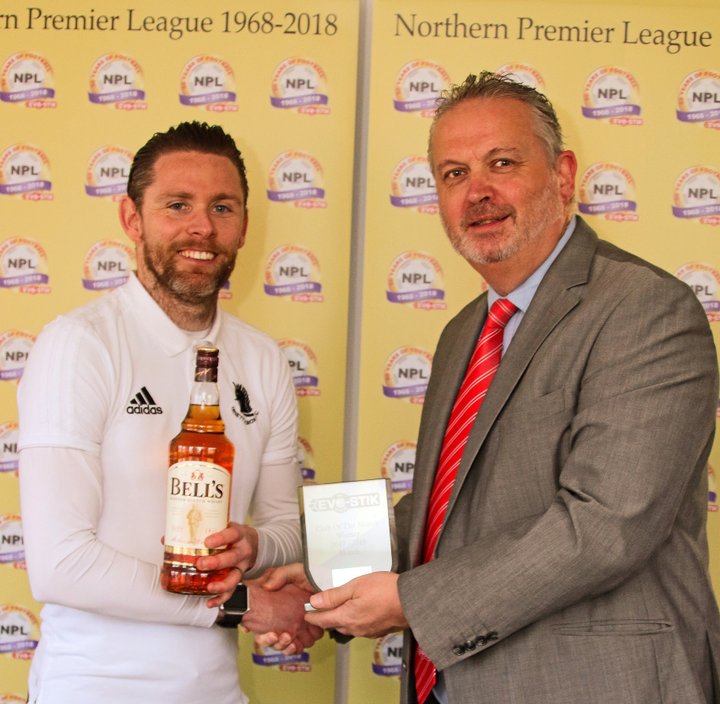 Ossett Albion have been rewarded for staving off relegation from the Northern Premier League by spectacularly turning around their season!

Unicorns manager Andy Welsh is pictured collecting one of March's Club of the Month accolades at Dimple Wells on Tuesday night from league representative Paul Hatt before guiding his side to a 2-2 draw in EVO-STIK League North with Tadcaster Albion.

Named as one of the penultimate recipients of the monthly awards alongside Stalybridge Celtic and Lincoln United in the top flight and EVO-STIK League South respectively, like all winners, the Unicorns were presented with an engraved glass trophy to mark their form and a bottle of spirits to celebrate with.

Welsh and his side certainly saved their best until last this term to win their first accolade of the NPL’s historic 2017-18 50th anniversary campaign. In deep trouble at the wrong end of the table by February and fighting to secure their survival and EVO-STIK League status, the Unicorns romped to five wins out five to collect 15 points and climb 13 points clear of this season's single relegation spot.

The accolade couldn't have come at a better time for Welsh either. Only days after March's awards were announced, he was named as the new manager of Ossett United if the proposed merger of Ossett Albion and Ossett Town for next term is given the go-ahead by the Football Association and the NPL this summer.