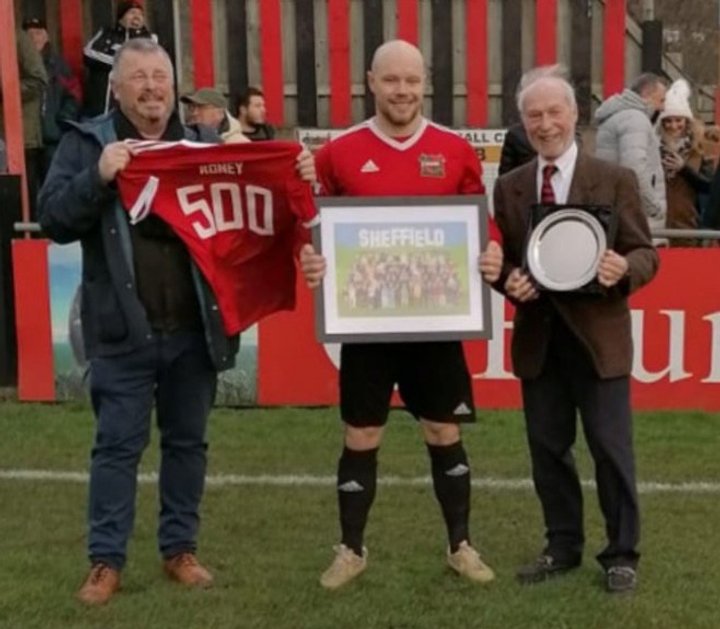 Sheffield record-holder Matt Roney says it is a privilege to play for the world’s first football club after making his 500th appearance.

Roney, 36, made his 500th appearance in the 1-1 draw at home to Belper Town on Boxing Day, and was recognised by a guard of honour at the beginning of the draw against Stocksbridge Park Steels on January 4th, where he was also presented with a shirt and memento.

He has made nine appearances, all off the bench, in 2019/20 and combines playing with a coaching role, helping to bridge the gap between the players and the management.

“I’ve been counting down for the past two years, it’s one hell of an achievement,” said Roney. “It was always in the back of my mind to get there. The club have always printed the stats in the programme so you know where you’re at, and that’s a nice touch from them.

“It’s good to be recognised. It’s a privilege to play for the world’s first football club.

“I’m a Sheffield lad, I work local and it’s one hell of a club to be a part of. Any non-league footballer would love to have had the experiences we’ve had.”

Roney started out at Sheffield Wednesday as a nine-year-old and played there until switching to Sheffield United at 16. A brief spell at Hull followed, and he ended up playing for Hallam in non-league, following their management team to Buxton, where he spent two years.

He joined Sheffield in the early stages of the 2005/06 season, making his debut in the 3-0 win over Hollinsend Amateurs, and made 32 appearances in his maiden year. He was a mainstay of the side for the next decade, and of his 501 appearances to date, 288 have been starts.

During that time he has scored 56 goals and been awarded man of the match 33 times, including in each of his first four appearances.

He was part of the side that won promotion to the Northern Premier League in 2007.

And he’s never felt like leaving Sheffield, despite the desire of many players to move clubs for an extra bit of money here and there - and his longevity and commitment to the cause is something he’s asked about frequently.

He added: “It doesn’t surprise me players leaving for money, that happens. A lot of players rely on their wage from football. Some just jump ship if not in the starting 11 for an extra tenner, whereas I believe in fighting for your place, and if I was a manager, that’s the sort of player I’d want, players who play for each other.

“Of course players want to play higher, and that’s what it’s all about. But when lads are leaving for more money to play at a bottom half team. It’s personal preference, I’ve always believed loyalty gets you further.

“Non-league has been great to me, I’ve enjoyed every minute of it and I wouldn’t change a thing.”

A pre-season tour of Russia this summer was one of several international exhibitions that Roney has been part of, and he counts Hong Kong and India amongst his other unlikely footballing destinations playing for the world’s first football club.

His highlights include playing against an Inter Milan side featuring Marco Materazzi and Mario Balotelli in front of 20,000 at Bramall Lane as part of Sheffield FC’s 150th anniversary, and his testimonial against Chris Wilder’s side in September 2018.

Despite having 500 appearances under his belt, Roney still has some unfinished business.

He said: “We’ve lost twice in the fourth qualifying round in the FA Cup, one year we got to a replay and were in the draw for the first round and got Carlisle away. It’s something I’ve always wanted to get to and it’d be massive for the club, with the TV and revenue it brings, it’s just never happened.

“I’d love to get a promotion. We’ve only had the one promotion in my time here and that was the first year. We’ve had some good play-off games.

“There’s talk of a new ground, so once we get that all up and running and we’ve moved to Sheffield, hopefully we can climb the leagues and maybe do a Salford.

“It’s a great club, it’s well run. If it can stabilise, get a new ground and continue the development of the club, you’re only two promotions away from giving it a really good go.

“I’ll play as long as I can. Last few games I’ve been brought on as a sub to do a job and I’m happy to play wherever I’m needed.