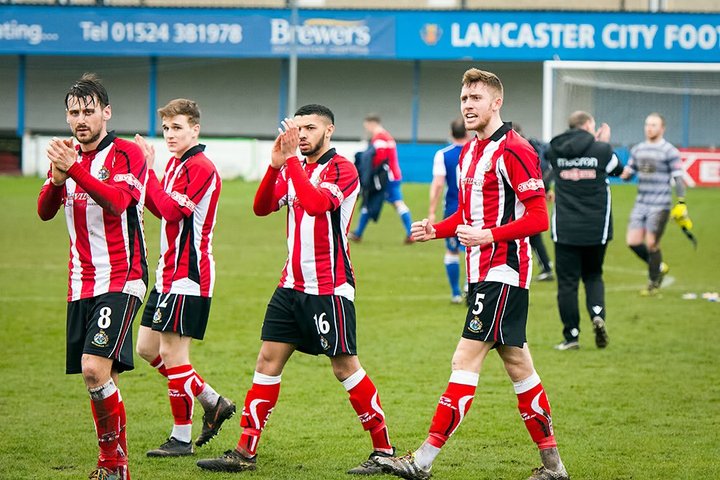 Their 2-1 win at the Giant Axe against Lancaster City and defeats for second and third-placed sides Warrington Town and Grantham Town allowed the Robins to extend their lead at the top of the table to eight points.

Altrincham took a 10th minute lead when Jordan Hulme’s shot was fumbled over the line by the Dolly Blues keeper. Seven minutes later the visitors doubled their lead when Tom Hannigan headed into the net from John Johnston’s corner.

City pulled a goal back in the 24th minute when Connor Simpson headed home a Stephen Akrigg cross. Altrincham had the lions share of second half possession without managing to trouble the scorers again.

Warrington went down to a 2-1 defeat at the Weaver Stadium to in-form Nantwich Town, for whom this was a fifth game unbeaten.

And the Dabbers had to come back from being a 28th minute Sean Williams penalty behind to win too. Toby Mullarkey equalised five minutes before the break and then a spot-kick of their own converted by Harry Clayton gave them the lead in first half injury-time – a lead they kept.

Grantham were shocked at The Meres by mid-table Mickleover Sports. And the afternoon couldn`t have got off to a worst start for the Gingerbreads when they had keeper Kieran Preston sent-off after less than two minutes for hauling down Euan Garnett on the edge of the area.

With no sub keeper on the bench, midfielder Jack McGovern had to don the gloves and he was beaten by Jimmy Phillips from the resulting free-kick. Jak Hickman doubled Sports` lead in the 19th minute and McGovern was beaten again a minute before the break through Garnett but kept a clean sheet in the second half!

Those defeats gave fresh hope to Ashton United of finishing runners-up as they coasted to a 4-0 Hurst Cross win over Whitby Town.

The Robins raced into a 2-0 lead inside seven minutes through Dean Smalley and Lewis Baines. Josh Granite added a third with 27 minutes gone and Smalley his second and Ashton`s fourth 19 minutes from time.

Fifth-placed Farsley Celtic made it back-to-back four goal wins after a 4-1 success at Bower Fold against Stalybridge Celtic.

The visitors had both Nathan Cartman and Nathan Turner bagging braces, with the former scoring in the 31st and 35th minutes and the latter in the 48th and 80th minutes – Brice Pouamoun replying in stoppage time.

Shaw Lane AFC, with three games in hand on Farsley, are four points behind in sixth after a 3-1 win at Dales Lane against Rushall Olympic.

The crowd had to wait until 13 minutes from time to see the first goal, which came from the Pics` Richard Brodie. But three goals in the final six minutes from Paul Clayton and an Olly Dyson brace sealed the Ducks` win.

Sutton Coldfield Town are relegated after their 2-1 defeat at Kirkby Road against Barwell, coupled by a point gained by second-bottom Halesowen Town in a 0-0 draw at Marston Road against Stafford Rangers, finally condemned the Royals to the drop after spending the majority of the season at the foot of the table.

They gifted Barwell a 35th minute Niall Flint own goal and after Karl Hawley`s 42nd minute equaliser had sent the teams into the break all-square, Matt Stenson`s goal on the hour-mark for the Canaries sealed the Royals fate.

Elsewhere, Harry Limb bagged a brace as Matlock Town made it back-to-back wins in a 3-1 home verdict over Coalville Town, whose Dan Creaney had given them a sixth minute lead – Mike Williams scored the third for the Gladiators.

Liam Hardy topped and tailed goals from Anthony Wilson and Bradley Grayson as Buxton won 4-2 at Silverlands against Workington AFC, for whom a Scott Allinson penalty and a last-minute Dave Symington effort replied.

And Danny Glover grabbed a stoppage time equaliser for Hednesford Town as they shared a 1-1 draw with Stourbridge at Keys Park – Luke Benbow having given the Glassboys a 63rd minute lead.

Royals backed to bounce back  Barwell sent their commiserations to Sutton Coldfield Town and backed them to bounce back on Saturday night after helping to relegate the Royals from the EVO-STIK League's top flight.