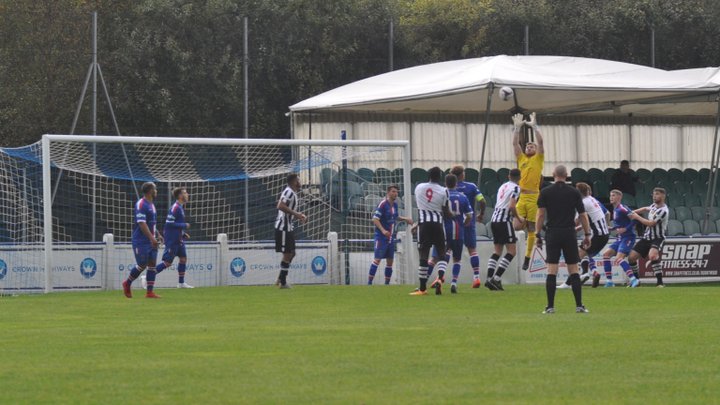 Carlton Town’s incredible start to the season continued as they made it four away wins from four at Chasetown.

Martin Ball and Tyler Johal were the scorers as they returned to the top of the BetVictor Northern Premier S/East table, with Leek Town on FA Cup duty.

Cleethorpes Town are up to third after they won 2-1 at Newcastle Town.
Alex Flett and Jack van der Laan exchanged goals within 60 seconds midway through the first half, but Lewis Collins’ contribution two minutes before the break was decisive.

Another team loving life on the road this season are Worksop Town, who made it four wins from six with a 4-1 defeat at struggling Market Drayton Town.
Two goals in as many minutes from Andrew Gascoigne and Connor Brunt sent the Tigers on their way, before Craig Mitchell’s goal on 55 minutes put the game beyond the hosts, who are rooted to the bottom of the table with 11 defeats in 12 games.

Stamford moved up to fifth in the table with a 5-1 thumping of Frickley Athletic. Thomas Siddons and Tendai Chitiza scored two each.

They sit just above Stocksbridge Park Steels, who were 3-1 winners at Wisbech Town

There was an early flurry in this one, Scott Ruthven scoring in the very first minute, and it was 2-1 by the 13th minute, with Josh Nodder doubling Steels’ lead before Joel Earps pulled one back.
Lewis Whitham made sure of the points eight minutes in to the second half.

Sheffield threw away a two goal lead to lose 3-2 at home to Ilkeston Town.
A Chris Robertson own goal and Ryan McLean had given Sheffield a 2-0 lead just after the hour mark, but goals from Thomas Fielding and Shaun Harrad levelled things up, before Thomas Marshall stole the points a minute from time.

Glossop North End were the big winners of the day, thumping six past Spalding United in a 6-1 win.

Porya Ahmadi scored a hat-trick, while there were also goals for Mohammed Sheriff, Prince Ekpolo and Livesey Mason.

In the weekend’s other game, a Ryan Robbins penalty was enough for Loughborough Dynamo to see off Lincoln United.