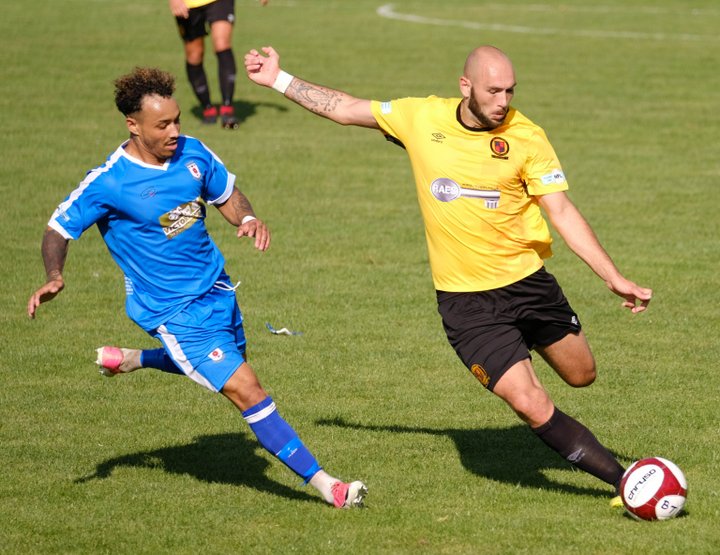 There are two sides with a 100% record at the top of the BetVictor Northern Premier S/East Division.

Carlton Town are one of the stories of the season so far, only reprieved from relegation at the end of the last campaign, they proudly sit second with four wins from four.

Perhaps even more impressive was that they maintained that record despite trailing 2-0 at half time at home to Frickley Athletic.

Rieves Boocock marked his Frickley debut with a brace, but Tyler Blake’s 23 minute hat-trick turned things round for Carlton.

Top of the tree are Leek Town, who beat Sutton Coldfield Town 2-0 thanks to a Tim Grice brace.

The game of the day came on the east coast, as Cleethorpes Town got the better of Loughborough Dynamo in a nine-goal thriller.

Loughborough led 2-1, 3-2 and 4-3, but went down 5-4 with Scott Vernon and Josh Batty scoring the decisive goals in the final quarter.

Stocksbridge Park Steels remain unbeaten, with the league’s top goal scorer Luke Mangham scoring his sixth and seventh goals of the season in a 2-1 win over Lincoln United.

His goal on the stroke of half time was cancelled out three minutes in to the second half by Alberto Seidi, but Mangham struck from the penalty spot with just a minute to go for Steels’ third win in four.

Rounding off the list of five unbeaten teams in the division are Belper Town, who struck twice in the second half to defeat Glossop North End 2-0.

Stamford suffered their first defeat of the season as they were turned over 3-1 at home to Sheffield.

Marc Newsham and Mitchell Dunne had the visitors two up inside 16 minutes, and though Tom Siddons pulled a goal back, Newsham made sure of the points three minutes from time.

Wisbech Town remain winless, but they did register their first point of the season, coming from two goals down to draw 2-2 at Newcastle Town.
Daniel Needham and Michael Conlon gave the hosts a two goal lead at the break, but Declan Rogers’ brace - both coming inside four minutes around the hour mark - earned Wisbech a point and lifted them off the bottom.