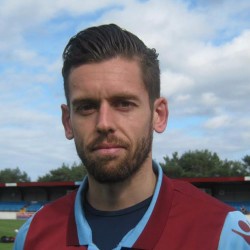 Colwyn Bay skipper Wes Baynes has given the club a huge boost by rejecting an offer to play elsewhere and committing to the coming EVO-STIK Northern Premier League campaign.

Delighted officials at Llanelian Road say the 27-year-old midfielder turned down an approach from National League North club Brackley Town to carry on playing for manager Ash Hoskin who has handed him the skipper's armband for the upcoming Premier Division season.

Although a move would have meant more money, Baynes, pictured, told the club's fans he was happy to extend his stay for another campaign.

The former Wrexham and Telford player said: "I am more than happy to stay. I enjoyed myself here last season and although a few clubs approached me in the summer, once I'd spoke to Ash it was always Colwyn Bay where I wanted to be.

"We've got a good set of lads here who I think can get us promotion. That is the aim. I won this league with Chester so I know what it takes and I definitely feel we have the quality of player to mount a strong challenge.

Hoskin said: "Brackley's management team contacted us about Wes and I have always said I would not stand in any player's way if a team from a higher league came in for them. But straight away Wes said he wasn't interested and didn't even want to talk to them.

"He wants to stay here and that says a lot about him and the spirit and unity we are building in the dressing room."

Hoskin has also beaten off competition from FC United of Manchester and Southport to sign 19-year-old North Wales-born winger Cory Williams who was with Chester last term.

Williams earned a trial at Swansea after starting out at Hereford and Hoskin added: "He is the type of player we have been looking for. He gives us width, likes to run at defenders and gets in good crosses."

 CEO will soon be a shining example for charity! Farsley Celtic's chief executive Joshua Greaves and the club's head of media Rob Winterbottom should make for a striking pair in the boardrooms of the EVO-STIK Northern Premier League when the new season kicks off.