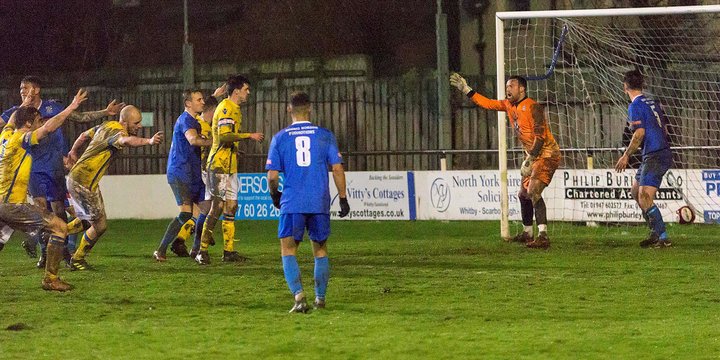 Thursday night's three games in the EVO-STIK League Premier all three had a bearing on the race for promotion, writes Pitchero's Steve Whitney.

Leaders Altrincham received a boost without playing as they saw second-placed Warrington Town drop two points at the Turnbull Ground against Whitby Town.

And it could have been almost title race over for the Wire until the grabbed a last-gasp equaliser. Lewis Mahoney gave the Seasiders an early second minute lead that Jack Higgins cancelled out within five minutes.

But Matty Tymon restored Whitby`s lead seconds before the half-time whistle. And they held that lead until four minutes into stoppage time at the end of the game when Higgins scrambled home his second of the game, pictured.

Celtic`s fourth game in a week looked as though it had caught up with them, although they did go into the break in front, thanks to a 42nd minute Nathan Cartman goal. But Rob Hopley deservedly levelled for the visitors 11 minutes into the second half.

The Ducks recovered from last Monday`s defeat to Marine AFC with goals from Ollie Dyson after 15 minutes and then Damian Reeves 5 minutes into the second half.

The game between Stourbridge and Stafford Rangers was postponed with a waterlogged pitch.