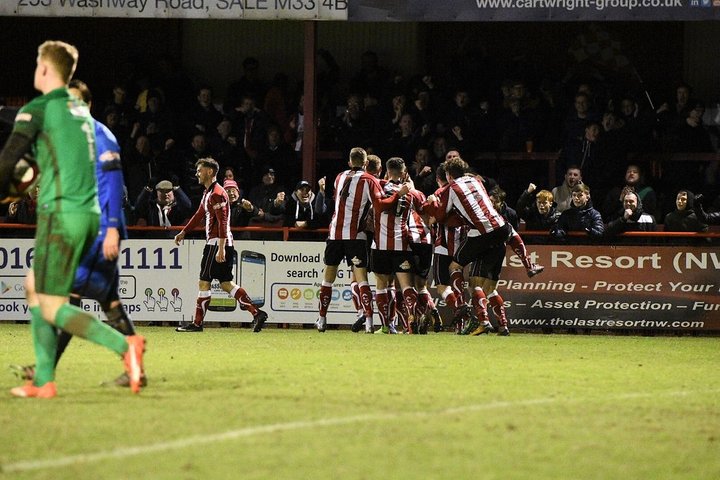 Altrincham extended their lead at the top of the EVO-STIK League Premier to six points on Tuesday night after hammering play-off chasing Shaw Lane while second-placed Warrington Town could only draw at home to Workington, writes Pitchero's Steve Whitney.

New Shaw Lane boss Chris Willock suffered a baptism of fire as a tremendous performance from the leaders condemned the Barnsley-based outfit to a fifth successive defeat.

In front of a crowd of 805, the hosts took a 10th minute lead when Tom Peers finished off a good through ball. The visitors got back on level terms from the penalty spot in the 37th minute when `keeper Tony Thompson was judged to have felled Godwin Abadaki and Spencer Harris converted the spot-kick.

But the Robins blew the Ducks away with a three-goal burst in 10 minutes just after the break, Simon Richman with the first on 48 minutes, followed by a Jordan Hulme brace. And they made it a nap hand 18 minutes from time through Jake Moult.

Warrington took the lead at Cantilever Park on the half-hour mark through Mekhi Leacock-McLeod.

But they were unable to break down the visiting Reds after that and they pulled level three minutes after the restart through David Symington to eventually earn a point and damage the Wire`s title hopes.

A terrific team performance at Bower Fold against in-form Stalybridge Celtic meant a 3-1 for Grantham Town to lift them up to third in the table.

Zayn Hakeem after 17 minutes, Lee Shaw on 25 minutes and Sam Osborne in the 88th minute were all on target for the Gingerbreads, with Alex Honeyball netting a stoppage time consolation for the hosts.

Grantham slipped above Ashton United in the table after they were beaten 4-2 at Dales Lane by Rushall Olympic.

Liam Tomsett gave the visitors the boost of an early second minute lead that Danny Waldron cancelled out within two minutes. It wasn`t until nine minutes into the second half that Daniel Dubidat scored the Pics second and Mathis Fonovich added a third after 63 minutes.

John Pritchard gave Ashton hope when he reduced the deficit to just one after 68 minutes, but Simeon Paiseley ensured the points stayed at home with a fourth in stoppage time.

Rob Hopley gave Albion a 17th minute lead that the Yeltz cancelled out after 27 minutes with a Nick Ryan own goal. Steven Tames restored the hosts' lead from the penalty spot 11 minutes into the second half, only for Ahmed Ali to level on 76 minutes before veteran former West Brom striker Lee Hughes popped up with Halesowen's stoppage time winner.

Elsewhere, Whitby Town sent Mickleover Sports home empty-handed after a 3-2 win at the Turnbull Ground in which Junior Mondal gave the Seasiders a first-minute lead.

Andy Dales equalised two minutes after half-time, only for Callum Patton to restore Whitby`s lead eight minutes later. A Lewis Maloney penalty made it 3-1 on 66 minutes, with a second for Dales making it a nervy final 12 minutes or so.

Marine AFC and Nantwich Town shared a 1-1 draw at the Marine Travel Arena in the evening`s other game, the Dabbers leading through Harry Clayton's 20th minute effort until the hour-mark when Josh Amis equalised.

 Trio all set for touchline debut Matlock Town are hoping a big crowd will turn out to see their temporary management team take charge of the EVO-STIK League's Gladiators for the first time on Wednesday night.

Hot-shot in illustrious company  EVO-STIK League Buxton are hailing Liam Hardy as one of their finest after the hot-shot joined their select club of centurion strikers.