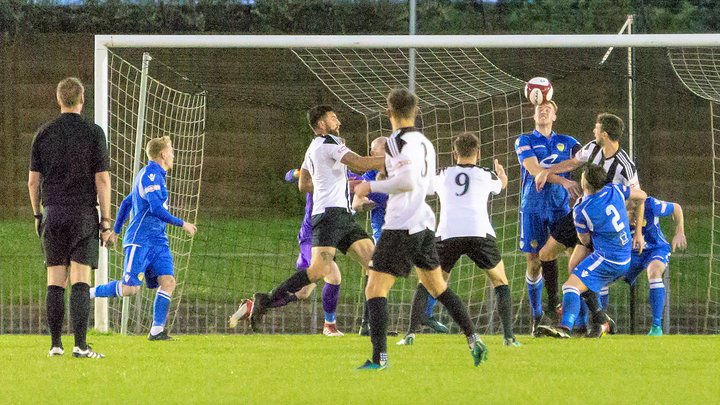 There was almost a full fixture list in the EVO-STIK League Premier on Tuesday night – almost as the games at Altrincham and Stalybridge Celtic were postponed, writes Pitchero's Steve Whitney.

Warrington Town`s chances of finishing second and a home play-off semi-final draw took a blow when they were held to a 0-0 draw at The Meres by fourth-placed Grantham Town, who could still miss out on the top five if Shaw Lane AFC win their two games and the Gingerbreads fail to at least pick up a point against already-relegated Sutton Coldfield Town on Saturday.

But that draw gave Ashton United an outside chance of pipping Warrington to second place after the Robins won 2-1 at Causeway Lane against Matlock Town.

And they had to come back from being a 17th minute Ted Cribley goal down to win too, thanks to John Pritchard five minutes later and then Jack Dyche 13 minutes from time.

Ashton now have to beat Workington AFC on Saturday and hope Warrington lose at Stourbridge – there`s also a one-goal advantage to the Wire should it go to goal difference.

Farsley are fifth and three points ahead of Shaw Lane after a 4-1 success at Wincham Park against Witton Albion.

They too had to from being a 15th minute Paul Williams goal down to win, courtesy of Luke Parkin after 28 minutes and then an Isaac Baldwin hat-trick in the 50th, 56th and 66th minutes.

Shaw Lane maintained their challenge with a best-of-five win at the Weaver Stadium against Nantwich Town.

It was yet another game where the eventual winners fell behind – in this case 2-0 down to goals from Jordan Cole after 19 minutes and Matty Bell a minute before the break.

Former Harrogate Town favourite Chib Chilaka pulled the first back for the Ducks on the hour-mark and then Godwin Abadaki equalised 9 minutes later. Two minutes after that, Kelvin Lugsden grabbed the visitors` winner.

Elsewhere on Tuesday, Rushall Olympic also came from being 2-0 down to goals from Lewis Maloney after 34th minutes and Kyle Fryatt 3 minutes into the second half to win 3-2 at the Turnbull Ground against Whitby Town.

Gurjit Singh got the first back for the Pics 10 minutes after the restart and Joe Hull levelled it on 64 minutes, with Danny Waldron winning it for the visitors a minute later.

Ryan Baldwin grabbed a stoppage time equaliser for Barwell at Kirkby Road against Stourbridge, whose Brad Birch had them in front after 68 minutes.

It was a similar story at the Giant Axe, where visiting Buxton led through Liam Hardy`s 27th minute strike until time added on at the end of the game when Tom Kilifin levelled for the Dolly Blues.

Tuesday's First Division South review  Alvechurch need only a point from their remaining two games, or Frickley Athletic to drop a point, to secure the second automatic promotion spot from the EVO-STIK League South in their first season back at this level, writes Pitchero's Steve Whitney.